Interview With Gris Grimly, producer and director of Ghoultown's "Mistress of the Dark" Video 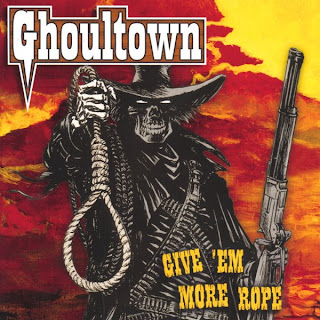 I remember this particular day in film school… it was early in the program, probably first year. Maybe the first semester of the second year, I can’t recall. Whatever, not the point. The point is, we were all jammed in one of the smaller theaters and we had some guest speaker come in. I can’t even recall who he was. He started off by asking, “So, how many of you want to be feature film directors in Hollywood?” As you can imagine, almost everyone in the class raised their hands.

Now, what he was trying to demonstrate, and what was probably lost on everyone, is… chances are it’s not going to happen. By ‘not going to happen’, I don’t mean becoming a filmmaker. I mean joining that upper echelon of Hollywood. Think of the odds. How many other classrooms in how many other schools would the same percentage of hands go up? It doesn't take a boy genius to realize that the odds are stacked against us.

Now, film is an art, no question. However, it’s also a business... and if you want to get by, holding out for a studio to come around and ask you to make your opus ain't going to put food on the table. However, there’s lots of things that you can do that does pay the bills. And the more footage your shooting, the more stuff you’re making, the more doors you’re going to open. You can be shooting corporate videos, wedding videos, stuff for local TV, short films or even music videos. In fact, music videos are a great opportunity.

Just as there’s lots of up and coming filmmakers, there’s lots of up and coming bands. In today’s day and age, those bands need videos made and making music videos is a great way to get some practice, hone your skills and do something creative. I know that Brad recently went out and shot a music video, which you can find here. Anyhow, when I found out that Gris Grimly, the extremely talented writer/director of “Cannibal Flesh Riot!” (a film we covered some time ago - see here), had just done a music video for Texas Hellbilly rock band, Ghoultown, I wanted to know more.

Gris is one of those guys that oozes talent. He studied art, went on to do concept work for studios, while creating dark and twisted children’s books on the side. He then got into illustrating, as well as filmmaking. His first short film was the afore mentioned “Cannibal Flesh Riot!” and he went on to do some other shorts, plus make this video. The song is called “Mistress of the Dark”, after the legendary Elvira, who is actually in it. It was produced on next to no budget, but they managed to shoot at the Magic Castle in Hollywood and put together a great video. We had the pleasure of discussing the whole thing with Gris and if you’re interested in the music video scene, you should definitely give it a read. By the way, if you want to check out "Mistress of the Dark" by Ghoultown - here's a link to the video on Youtube.

So, last time we talked, we discussed your film “Cannibal Flesh Riot”, what have you been up to since then?

I have a problem with doing too much. I love working on fun inspirational art projects and I want to do it all. So I never turn anything down. I did some artwork for a few bands and finalized the Mistress of the Dark Music Video. But for the most part, I've been working on my new film Wounded Embark of the Lovesick Mind.

Tell us a bit about the “Mistress of the Dark” music video and how you got involved with the project.

Ghoultown did a song for my Cannibal Flesh Riot! compilation. Somewhere along the line, I thought it would be a good idea to do a music compilation to accompany the DVD of my film. They were one of the many bands that I sent the film to and one of the 16 bands that wrote and composed a song inspired by the film. A year or so down the line, they met up with Cassandra (Elvira) at a horror convention. She loved their music and they worked out a plan to write a theme song for Elvira. I'm not sure where the idea to do a music video came from, but they thought of me and CFR and asked if I would direct the video for them. I've already met with Cassandra and we've discussed briefly working together. So of course, how could I turn this opportunity down.

Talk about the process of creating a music video, how is different from film and how is it similar?

I learned alot from my first film. Even after that, my friends and I would get together, drink ourselves stupid and make little films. So between Cannibal Flesh Riot! and Mistress of the Dark, I learned quite a bit. I was much more prepared for the shoot. We shot quicker because we had to and made less mistakes. The difference between shooting a music video and a film is you have the rhythm of the song to contend to. This being my first music video, I didn't know the difficulty of directing narrative acting during the song. The scene where the band is performing on the variety show was easy. You just film the band performing the song. But to have them acting out a scene like crawling out of a television, knocking over Elvira, helping here up into your arms...AND THEN start singing on cue? It was challenging. That would be the part that really sets this music video apart from a film.

We shot on the HVX in 2 days. The band flew in on a Thursday night. They got in around 1 or 2 AM. We drank some beers and had a quick meeting. Slept for a couple hours. Got to the Magic Castle around 6am. I think Elvira showed up around 10:30. We shot at that location until around 5 or 6 pm. Then reconvened at my place, drank some beers and shot more footage. We woke up Saturday morning, cleaned out my garage and set dressed it like a country variety show stage. We shot the footage for the Har Har show until around 4 or 5. Then we had our wrap party. 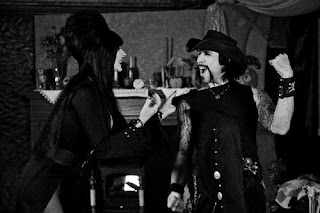 The legendary Elvira, the subject of the song, is actually in the video. At what point did she get involved, what was it like working with her and… she looks pretty damn good for how old she must be. So, how old is she and does she look as good in person?

Like I mentioned, Elvira was involved from the start. She and i have had conversations about working on a project together. Then when she saw Ghoultown perform at a horror convention, she approached them about doing a song for her. She was amazing to work with. I can't say enough good things about her. You grow up mesmerized by someone on television, and then you meet them as an adult and find them to be a truly good person...that is a rare thing. She truly is amazing. How old is she? I don't know. There must be something wrong with the records because she can't be a day over 36.

A lot of up and coming bands approach up and coming filmmakers about getting involved in their music videos. Do you feel that doing them is something that is beneficial and could further a career?

I'm not sure if it would be beneficial or further my career. But if I like the band, if the project seems right, and if time allows, I would do it.

Talk a bit about what you feel makes a good music video.

I think there should be a good story told throughout the video. Making pretty pictures is one thing, but I like there to be something more than that to carry you through the song. Unless you're brilliant like Michel Gondry.

The process in distributing a film differs greatly from distributing a music video. How’s it going in that regard and what’s the goal, as far as getting the video out there?

We, as in Cassandra, Ghoultown and I, have decide to create a maxi-single CD/DVD. This will include a Ghoultown EP containing the Mistress of the Dark song, some remix versions and a couple other B-side tracks. The DVD will include the music video, a making of documentary, and many other great special features and easter eggs. There is a full episode of our very own Har Har show. This consists of three live performances from Ghoultown and a handful of cornfield jokes hosted by a hillbilly played by David Backhaus who played Stash in Cannibal Flesh Riot!. One of the easter egg clips comes from the Elvira archive. I think fans are really going to dig it.

Where can people check out the “Mistress of the Dark” music video?

Until the DVD comes out, you can see it on youtube. I'm not sure what else the band has planned to do with it.

What’s next? Do you have any new projects in the works?

Right now, I'm just working on finishing up Wounded Embark of the Lovesick Mind. It's another 30 minute short film I've wanted to do for a few years now. Although the idea started back when I was in college in 1996. Unlike CFR, this film is much more grounded in reality and has some extremely gory scenes sure not to disappoint. I'm also going to be illustrating Mary Shelley's Frankenstein which will be released in 2010.
Posted by Dead Harvey at 9:00 AM