New Horror On The Big Screen & A Few Festivals To Mention 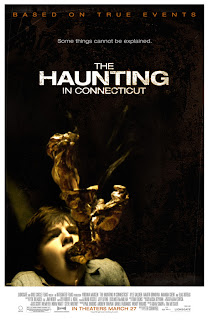 Well, it's officially Spring, it's officially Friday and there's officially a decent looking horror film coming out today, officially. "The Haunting in Connecticut", released by Lionsgate, comes out today and it's the second biggest release of the week, behind "Monsters Vs. Aliens", which is opening on 125,870 screens, 3 of which are in space. The artwork for "THIC" is awesome, very creepy... the trailer is well put together. If you're interested, it's supposedly based on the true story of the Snedeker family's encounter with the paranormal in Southington, Connecticut. It's directed by Peter Cornwell and it's his feature directorial debut... check it out, if you can. Otherwise, let's look at what's going on in festival world.

I was recently informed of a new festival called the "Vampire Film Festival" and it just recently opened for submissions. Just going through their press release here... "Vampire Fest" will come to New Orleans in late Autumn 2009 and they'll be accepting all films that could be classified in the context of vampire, supernatural and the bizarre. They'll accept any narrative or experimental film that emphasizes the grotesque, mysterious or desolate. Also, as werewolves and other supernatural creatures are interconnected with that of the vampire, "Vampire Fest" will be open to films of the Goth, zombie and werewolf, witch or ghost genre... and there will be awards in various categories. I haven't replied to their email yet, but I should be hearing more about the festival soon.

If you're in the Cleveland area, you should be getting ready for the Cinema Wasteland Movie and Memorabilia Expo, which is next weekend, on April 3rd-5th. They're going to be showing some classic horror films ON film, such as "The Corpse Grinders", "The Fun House" and "Day of the Animals". They're also screening a whole bunch on DVD or video and a lot of them are films that we've reviewed and talked about here, such as "Breaking Her Will" from Bill Zebub, "Isle of the Damned" from Mark Colegrove & Mark Leake and "Stockholm Syndrome" from Ryan Cavalline. There's going to be lots of good indie horror, there's Q&A sessions with a lot of the filmmakers and much, much more. So, definitely go support that if you're in the area!

I was going to mention a bunch of approaching deadlines and stuff, but I'll save that for later... I think this is enough information for today. Besides, I need to clear up a bunch of stuff in my inbox before I head out for the day. Have a good one, see you next week.
Posted by Dead Harvey at 9:00 AM