Film Fests, Catching Up With Old Friends and Drinking Monkies... 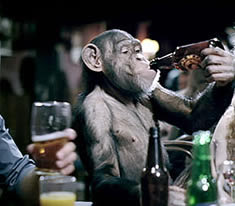 It's Friday and to quote Homer Simpson, "All right, brain, I don't like you and you don't like me - so let's just do this and I'll get back to killing you with beer."

There's a few deadlines and things for some of the horror festivals, but I also wanted to bring your attention to some things going on with a few films. I'll mention that after I quickly mention these festivals... and don't forget that the remake of "Last House on the Left" comes out today AND it's Friday the 13th, again. ...and we're a few short hours away from killing some brain cells.

Dragon*Con, which takes place in Atlanta, GA, is one of the biggest conventions of the year. In fact, they boast that they're the largest multi-media, pop culture convention focusing on sci fi, gaming, comics, literature, art, music and film in the US. I'm buying, but only because I have nothing to retort with. The festival is a ways away, 174 days away, according to their site - it's Sept 4-7, this year. Anyhow, they do a Dragon*Con Independent Short Film Festival and their earlybird deadline, April 15, is approaching. Click on that link up there for more info.

Zompire: The Undead Film Festival, which takes place in Portland, OR, and who's website appears to be down at the time of this writing, has their late deadline today. So... I don't know if they're just updating it or not, but it's www.zompire.com, if you're interested. Either way, if you don't get to it today, you're kinda hooped. But you can still go check out the films and all that... I think it takes place in May.

I'm slightly confused, but the San Francisco Independent Film Festival just happened on Feb 5-22, but now they're saying that Another Hole in the Head: Two Weeks of Fantasy, Sci Fi and Horror has their earlybird deadline tomorrow, on March 14. I'm confused because when you search for Another Hole in the Head, it keeps pushing you back to the SF Indie Film Fest site. It looks like Another Hole in the Head is June 5-22 and you can go to their Withoutabox.com site to enter there... can't tell you much more, though. I don't know, maybe I'm way to sober to understand what's going on there.

Now, I usually use Amazon.com to see what's coming out every week, but I know that a lot of indie filmmakers don't use Amazon, for one reason or the other. I get some info through Myspace and email newsletters, but, just a side-note, if you want me to promote your film and put it out there, just email me. Anyhow, just catching up with some Dead Harvey buddies, here's what's going on out there...

Last summer, we interviewed Joaquin Montalvan about his film "M O B I U S", which, at the time, was not available to the public. However, the times, they are, uh, becoming quite different. As of now, "M O B I U S" IS available to the public and you can click HERE to get yourself a copy through CreateSpace. Even if you don't want to buy it, check it out and see how CreateSpace works, could be an option for you. Also, if you want to read the interview again, here's a link to that.

One of our favorite indie filmmakers, Bill Zebub, has finally got a couple of his films available on Netflix. So, if you're a Netflix user or you just want to take a look, click on the titles to be taken to their Netflix page - "Worst Horror Movie" and "Assmonster". If you haven't seen Bill Zebub films, these are two classics. They were deemed "too offensive" by Netflix, but they're finally available. We interviewed Zebub not too long ago and you can check that out here.

Not too long ago, when we last talked to Chris Penney, he was pushing his film, "Return of the Curse" and he's already back with another film, which blows his last film out of the water... This film, "The Ba3em3nt", is now available through Caachi Films and you can find it here. Once again, you may just be interested in heading over there and seeing how Caachi Films works, as it may work for you. If you'd like to check out the interview that we did with Penney, you can find that here.
Posted by Dead Harvey at 9:15 AM

Pretty helpful data, thanks so much for this article.