Film Fests and Contests: A Talent Scout, Fantasia, HP Lovecraft Festival and A Night of Horror 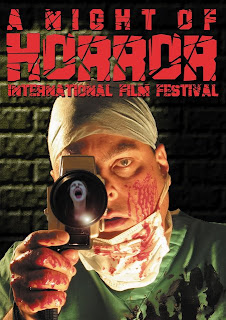 I had some stuff come up this morning and I was seriously considering skipping this post. However, I had already laid out a bunch of stuff, so I figured that I'd quickly go through them.

As some of you know (regular readers and friends), we've been working on a "Dead Harvey TV" project. So, I was looking into different ways to get the idea out there and I came across "A Talent Scout", you can find the site here. Basically, they're a contest for aspiring TV writers and they also do consulting and management, things like that. I wasn't going to go the 'contest' route, but, hey, why not? Just a thought for all of you - a lot of industry people aspire to work in TV, as it's not project to project work, it's like having a full time job. A lot of people want to be staff writers and lots of actors want regular work on TV. I bring up the thought because everyone seems to focus on feature length scripts and the film world.

Fantasia International Genre Film Festival is coming up this summer and they're currently accepting submissions. However, that's not what this is about. I received an email from them and they would "like to let you know about 2 releases from Evokative Films, a new film distribution company that speaks right to the Fantasia crowd. HANSEL & GRETEL, A South-Korean film by YIM Phil-sung, was released on March 6th at AMC Forum and will play until March 19th, so there’s only 4 days left to see the film on the big screen! The copy will then go to Toronto to play at the AMC Yonge & Dundas from March 27th. THE KILLER (LE TUEUR), a film by Cédric Anger that had 2 sold-out screenings at last summer’s Fantasia, is now available on DVD". I don't know much about either film, but I thought it was worth bringing up. However, if you're not in Toronto, you won't be able to check out "Hansel & Gretel" on the big screen, but look for it on DVD in the next few months.

Lastly, on the other side of the planet, the A Night of Horror International Film Festival, taking place in Sydney, Australia, starts on Wednesday, March 25 and runs until Friday, April 3rd. It's a huge, huge festival over there and it's worth checking out. Well, if you live in the area, I guess. It may be tough and expensive to put together a trip to get over there now. For more information, go to their site, which can be found here.

That's it for the week... have a great weekend and we'll see you next week!
Posted by Dead Harvey at 11:30 AM