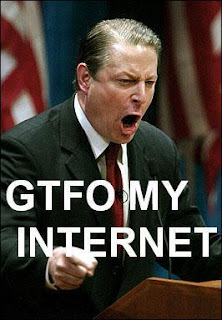 You know that IQ game? A fish is to water as a human is to... that could be a bad example, I was thinking 'air', but it may not be so obvious. Fuck, I write horror shit, not IQ tests, but here's another one, anyhow. Traditional media (TV, radio, etc) is to studio films as BLANK is to indie horror. That should be a bit clearer. It's the web. The internets. Al Gore's interweb tube. Those lines of communication that run up, in and around all of us, constantly. I've always preached that you need to do the basics, such as use Myspace, Facebook, Youtube and all that. That should be natural. Hell, you should be setting that shit up when the idea for a film first pops in your head. Anyhow, I get forwarded a lot of shit. Either places where our friends' films get mentioned, cool websites of upcoming films, web-based projects and new services. So, once a week I'd like to show you some of this stuff. Maybe it'll give you an idea, who knows? Also, if there's anything out there on the interwebs that you'd like to share, forward it on to me.

Here's something that'll make you ram your head into a wall, thinking... why the F didn't I think of that? LostZombies.com is a social network "whose goal is to create the world's first community generated zombie documentary". Basically, you go to the site, which is here, and you sign up - fast and free! Then, you get a profile page and you go get yourself familiar with their timeline... and each square in the 196 square grid represents an objective that needs to be fulfilled in order to complete the documentary. For example, one unfinished square reads, "Footage of individuals or people going to great lengths to acquire pharmaceuticals to treat the Campion Virus". Really, it's a wicked idea and I'm really anxious to see how it turns out. Very cool.

I don't know if you remember the interview that we did with Jeff Palmer, the award winning screenwriter of "The Sleeping Deep". If you don't remember it, check it out here. Anyhow, as he was researching his award winning script, he went on to the site "Strange Maine" to do some research. It's a site for all the weird shit that goes on in Maine and it explores its unique strangeness. Now, a few years later, the site reviewed the script and wrote a big article on it. In fact, if you're a filmmaker that lives anywhere near Maine, you may want to check the article out, as he goes into some serious depth on the scene in Maine - you can check it out here.

I knew it was a matter of time before we got a site like DownloadHorror.com, which you can find here and went live a week or so ago. You set up an account and can download horror films for around $10. All the movies are high-res, DVD quality. By that, I don't mean HD or Blu-Ray, just straight MP4 DVD quality. When you download them, you get the DRM-Free (digital rights management free), so you can play them on any device, as many times as you want. Even though they boast that they have one of the largest libraries of indie horror films, it appears that it's mostly Brain Damage films at this point. However, like I said, they just got started. So, you can assume that they'll get more films soon. If you don't like ordering off Amazon, you don't like going to the video store and piracy just ain't your thing, you've got another option.

Lastly, I was talking to the guys behind "Rotkappchen: The Blood of Red Riding Hood" and, even though they're currently in post on the film, they've got a wicked site up, which you can find here. Not only does it have a 'great ass' on the front page (seriously), they've done a really good job on putting it all together. There's some good art, plus the site itself is very basic, but has everything it needs. A good example of what indie filmmakers should be doing as they approach their release dates.

Like I said, please forward me anything that you'd like to throw out there or promote, whether it be a site for your film, a new online project or just some cool horror related shit that's out there.
Posted by Dead Harvey at 9:00 AM