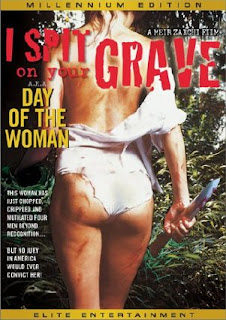 I think 2009 is going to be a pivotal year in horror, I feel a massive change in the air. I do. I think we're going to start getting back to gritty, realistic, brutal horror... which is cool with me. You see, everything's cyclical. The impact of the Vietnam war and the subsequent end of the hippie movement, thanks, in part, to Charlie Manson, brought about a certain 'end of innocence' in the 70's. This, whether you believe it's related or not, was followed by a new wave of horror. This is when we got "The Texas Chainsaw Massacre", "Last House on the Left", "Halloween", "I Spit on your Grave" and "Dawn of the Dead", to name a few. (BTW, the only one not remade at this point is "I Spit on your Grave", but I believe a remake is currently in the works)

I think the current war in Iraq and the state of the economy is going to spark another wave of brutal horror and this is the year that you're going to start to see it. Oddly enough, we're getting a re-envisioning of "The Last House on the Left" on March 13th, but the change is going to happen in indie film first. To be honest, I'm already noticing that indie horror filmmakers are starting to get away from the supernatural and fluffy horror and starting to get into the realistic, more 'horrors of humanity' stuff. By the way, DV and the micro-cinema 'feel' really lends itself well to these particular type of horror, too. It gives it a real creepy, homemade feel. Anyhow...

We all know that the heart and soul of film really lays with the indies and the indie filmmakers and that's where this change will all start. So, it got me thinking about the distributors... which made me realize, I haven't highlighted anyone new to add to my list of indie horror distributors. So, here's a couple new ones for the list; Brightly Entertainment and Creep FX.
I'm not sure if that all tied together, but give me a break... sometimes I'm coherent, sometimes I'm all over the place.

Brightly Entertainment is a small, boutique media production, distribution and international sales company operated by Rainmaker LLC. They also happen to distribute all the "Bikini Bloodbath" films, which they're on three, if you're interested. They acquire and produce select indie projects for worldwide distribution and their goal is to develop long term, mutually beneficial relationships with filmmakers. Basically, they're a small company and they're looking to do more than just distribute your one film, they hope to keep you making films and distribute all of them. Now, as they are a small distribution company, I'm not sure how many submissions they take... having said that, they DO have their contact information on their site and that means that you CAN mail them something.

Creep FX is a part of Maverick Entertainment Group. Maverick's been around since the mid nineties or so, but they launched Creep FX in 2004 because they saw the growth in indie horror and, in a short five years, they've built a decent library of indie horror and have distributed some pretty good films, including, "13 Hours in a Warehouse", "Blood Descendants" and "Zombie Night". They've got a pretty good foothold in the DVD market, as well. They distribute into Blockbuster, Wal-Mart, Netflix, Amazon, Best Buy and Circuit City... although they should update that on their site, as Circuit City has gone bankrupt. They do have a submissions page, which is nice. Just click on the 'filmmakers' tab and it'll take you to a page where you can download some form, then it gives you instructions on how to submit your DVD.
Posted by Dead Harvey at 9:00 AM

I'm totally paraphrasing this but-- "DV and the micro-cinema 'feel' of indies lends itself well to horror films, giving them a real creepy, homemade feel." That statement alone is very promising and motivating to indie filmmakers all over the world I believe. I've always believed that the difference between film and DV was merely an aesthetic choice, but I'm opening up to the notion that certain application of DV bode well for the filmmaker. Now...all that's left to do is to make my first Horror film :-) http://www.AngeloBell.com

A great example of this can be found in the new, Dreamworks acquistion 'Paranormal Activity." Check out more about it at www.onewaytv.blogspot.com