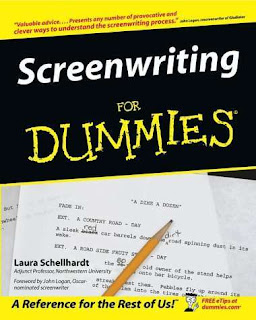 There's a pretty good reason why I haven't been posting on here regularly and I'll let you know what it is...

I'm polishing up a script that I'm going to be entering into the PAGE International Screenwriting Awards.  I've been working on this script for a while and, a few weeks ago, I saw that the late deadline for the contest was Monday, April 2nd.  So, I made that my goal.  When I say I've been working on it a while, I mean I've been working on it for a while... like, 2 years.  I wrote my first draft fast, like a month and a bit.  Then, I rewrote it a couple times, I gave it out to a few people to get their advice and feedback, then I sat on it... for about a year.  Not sure what I was doing during that time, probably just drinking and contemplating the shittyness of aspiring to be a screenwriter.  Anyhow, I picked it back up a few months ago and, well, here we are.  So, every spare minute I get, I've got that fucking thing open and I'm tweaking words, phrases and sentences.  I'm cutting lines of description and I'm really working hard to polish this turd up.  At absolute worst, I want to be done with it so I can move on to my next script, for Christ's sake.

There's only a handful of screenwriting competitions that are worth entering, let's start with that, and PAGE is one of them.  Slamdance's early deadline is in a couple weeks, that one is also worthwhile, especially as they have a horror specific category AND they've developed some of the screenplays.  I'll be entering it, as well.  Here's a link to the PAGE Awards site, as well as Slamdance, if you're interested.  I actually know a couple people that have been judges at PAGE and I've spoken with the festival director before.  I've also spoken with the festival director at Slamdance.  Long and short, I trust them.  For horror, there's also Screamfest and Shriekfest, but I don't know when their deadlines are.  I'm going to look into that.

The cool thing is that, for an extra $50 or so, both PAGE and Slamdance will give you feedback on your script.  This is really what I'm looking forward to.  Truth is, not that many people have read my work.  Sure, a lot of my friends in the industry have, but they're going to be bias.  Sure, a few friends outside the industry have, but they don't know a good script for a piece of shit.  Sure, my film professors and some script supervisors have read my work, but I was paying them.  This will be industry folks that don't know me at all and have nothing to gain.  I want to know where I stand with them.  Quite frankly, so should you.  If you're an industry outsider and you're an aspiring screenwriter, what kind of options do you have of getting noticed?  Well, I'll tell you what... some sort of accolade from one of these competitions is a good start and if you get the big heave-ho right away, knowing why you suck is just as important.

Anyhow, I'll let you all know how it goes, every step of the way.