Resident Evil Takes The Box Office and Some Good, New Horror on DVD 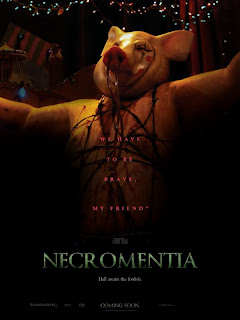 Quite frankly, I've never really liked Milla Jovovich. Well, she wasn't bad in "Dazed and Confused", but everything from, and including, "The Fifth Element" on, sucked ass. I should mention that the ending of "The Messenger: The Story of Joan of Arc" was okay, but only because she burned at the stake. Anyhow, as a horror loyalist, of course I've seen all the "Resident Evil" films and, despite Jovovich's best attempts to steer me otherwise, I find them mildly entertaining. I mean, what's not to like? Zombies get slaughtered. Good enough. The fourth installment, "Resident Evil: Afterlife", was the only new film to come out this last weekend and it won the box office with ease... it was the highest grossing yet for the franchise, but was the least attended. Why's that, you ask? Because it was in 3D and 84% of the theater-goers paid the premium to see it in that format. This Friday, we get "Devil", which was written by another person that I've grown to loathe, M. Night Shyamalan. It's directed by someone else, Drew and John Erick Dowdle, which is great... but it's PG-13, which isn't so great. Anyhow, let's check out the new horror that's out on DVD this week. As usual, you can see the trailers for these films on our Youtube Page and you can click on the titles to be taken to their Amazon Page, where you can read more about them and/or buy them.

" is a classic horror movie compilation and it's hosted by ventriloquist Nick Pawlow and his zombie pal, Happy Goldsplatt. They drape a loose idea around the compilation, as they're entertaining a theater that's filled with Happy's zombie buddies, with the trailers being presented by a drooling, half-wit, cannibal projectionist named Mad Ron. In any case, it's definitely one for the horror enthusiast, as it goes through 47 classic horror trailers.

Holy crap, the trailer for "Necromentia

Very rarely can Bill Cosby be tied to a horror film, but it can be done with "Within

". Hanelle M. Culpepper is an award winning writer/director whose career was started after her first screenplay earned her admission into Bill and Camille Cosby's prestigious screenwriting program for African-American writers. The film was meant for the Family Network or something like that, but the trailer looks okay... if you're into PG-13 ghost stories.

" is a feature film that's based on the "Hunting the Unknown" web series. "Hunting the Unknown" is, or was, a web series that's based around the exploits of Nigel Thorne, an adventurer that leads a crew to search for mythical creatures, such as the Yeti, Chupacabra or The Mothman. There's a group of characters, including a producer, an associate producer, a videographer, a sound operator and an editor. In "Bloodwood", they come to find a monster in the Bloodwood Forest, but end up fighting a group of feral cannibals. If you get the DVD, it includes the entire "Hunting the Unknown" web series.
Posted by Dead Harvey at 9:11 AM