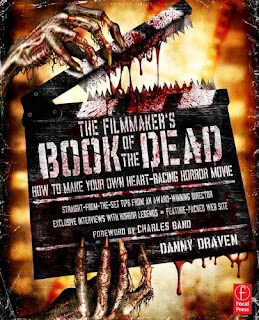 By now, I'm sure you've heard of this little no-budget indie horror film from Oren Peli called "Paranormal Activity". No? Well, it premiered at Screamfest in 2007, then Peli got picked up by CAA, then it had a big screening at Slamdance in 2008, was eventually picked up by Dreamworks / Paramount and is now getting a limited theatrical release. It was shot for around $15,000 and rumor around the campfire says it's genuinely frightening... in fact, when things were stalled at Dreamworks, Studio Chief Stacey Snider and Production Chief Adam Goodman gave a copy of the DVD to Steven Spielberg, who took it home to watch... and then, legend has it, he brought it back in a garbage bag the next day because he thought the DVD was haunted. Another story has him turning it off halfway through... but only because he was too scared to get through it. In any case, he did see it and he did get it the release they wanted AND he greenlit a remake that was to be made by Oren Peli because they wanted to be "in business" with him. It's the kind of story that indie horror filmmakers lean on. Bank on. Get jealous of. It's the kind of story that makes an indie filmmaker think, "I can do that".

Well, our congratulations go out to Oren Peli, it's an awesome success story, and I'm not saying you can't do what he did. In fact, you most certainly can... but, you need to realize a few things first. One, success stories like this aren't exactly common. There's probably 5,000 micro-budget films released every year (and I feel like I see maybe 1,000 of them). Then, there's probably more than that that are actually made, but never see the light of day... we can call them wastage. Films that probably didn't get finished because the filmmakers didn't actually think things through. Further, we'll go years before seeing a "hit" out of that pool. In fact, you can count the micro-cinema "hits" on one hand. "The Blair Witch Project", "Open Water", "El Mariachi" and... "Paranormal Activity"? I can't think of any other MASSIVE success stories off hand, please post a comment if you can think of others. Now, do the math. That's around 5 films over 10 years. So, 5 in a minimum of 50,000 or a 1 in 10,000 chance.

I don't mean to dissuade you, the odds are better than winning the lotto and Lord knows how much money I waste on that. Also, your goal may just be to get a film made and, obviously, the definition of a successful film is different for everyone. Maybe you don't want a blockbuster, maybe you just want to make more than your initial investment back? Regardless, what I would urge you to do is to know what you're getting in to. Know how this scene works and really figure things out before you spend your first dollar. There's various ways to do this... the easy, and most entertaining way is, watch a lot of indie horror films. The other, read everything you can on the subject. Blogs like this, Variety, Hollywood Reporter, other horror sites and whatever books you can find. Granted, there aren't too many books on the subject, but they do exist and we had the chance to talk to the author of one such book, here.

The following is an interview with Danny Draven, a filmmaker and author. He recently wrote the book "The Filmmaker's Book of The Dead" and it's all about the indie horror industry. We discussed the book and he offered up some good advice for you filmmakers... if you want more advice than this, well... you're going to have to pick up the book.

First off, tell us a bit about yourself. What are your influences, what got you into indie film?

I'm an independent filmmaker that mainly makes horror films. My new film, GHOST MONTH, just came out on DVD and Blu-Ray. I started out making movies with J.R. Bookwalter of Tempe Entertainment and that led to making films with Charles Band at Full Moon Pictures. I've always wanted to make indie films as a springboard to learn everything I could about making movies.

Yes. I'm a graduate of Emerson College in Boston where I attended film school. I learned a lot of theory and practice and was turned onto a lot of films and filmmakers at school, so for that I'm grateful. But, almost everything I learned about filmmaking was from being on set and doing it myself. I would say take your film school money and make your movie! You don't need a school to validate or qualify you to make a film, all it takes is your desire to do it yourself.

Tell us a bit about your book, “Filmmaker’s Book of the Dead”

The book was written for indie filmmakers. It's over 300 full color pages and I promise you it's packed with information you need to avoid the pitfalls of making and selling a film. It took me a year to write it, and I include everything I wish someone told me before I started making movies. The goal is to give you an insider's look and help you along the way.

Take us through the process of getting a book published… as an indie filmmaker yourself, what are the similarities and differences between that and getting a film distributed?

Actually, writing a book is a lot like a film production except it takes a bit longer. It all starts with an idea and concept, develops into an outline, gets approved, goes into the writing stage, gets edited, and finally gets printed and marketed like any product.

Is the book specifically for indie horror filmmakers or would the casual reader get anything out of it?

It's NOT just for horror filmmakers, anyone interested in indie filmmaking and distribution can benefit from the information. Don't let the cover fool you, it is very specific for horror subjects in areas, but the content on how to save money, run an efficient production, marketing, and distribution make with a valuable guide for all. It also has very exclusive interviews with filmmakers like Lloyd Kaufman, Robert Kurtzman, James Wan, Stuart Gordon, Robert Englund, and many more, talking specifically about things like directing, acting and production tips.

Shoot your movie in the highest HD quality you can afford, and make sure the quality stays high throughout the post process. If you want to SELL your film, it must be deliverable to a distributor. You must create an attractive, sellable product.

As it’s the one topic that everyone’s interested in, let’s talk about getting distribution for an indie film. What should every filmmaker know before they start sending out screeners and contacting distributors?

This is such a massive topic and I go into detail in my book on it. The most important thing to remember is to make sure your movie is deliverable to a distributor. This means having the proper masters and documentation ready and a passed QC report.

Talk about the indie horror scene right now. Where’s it at and where do you see it going?

Where can people find out more about “The Filmmakers Book of the Dead” and/or buy a copy?

It will be in bookstores everywhere from Focal Press on Janaury 8, 2010. You can pre-order a copy at Amazon.com, buy.com, bn.com, borders.com, and many other fine retailers. I recommend pre-ordering to secure your copy!

A new film and book coming soon.
Posted by Dead Harvey at 8:56 AM

So,if I have time,I would like to have a look at the film.Thanks for sharing your ideas to us.