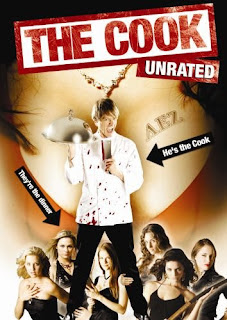 Sure, I could lead with "Sweeney Todd: The Demon Barber of Fleet Street", but I'm not. This site isn't about big budget films (although I did kinda like "Sweeney Todd" and I will cover it second), this site is about indie horror... so, I'll lead with indie horror. Let's start with Anchor Bay's "The Cook".

" is being released by Anchor Bay and it comes from director Gregg Simon. Simon worked for Brett Ratner while he was in college, then went on to make music videos and do some work in commercials, all while he also out making short films. His award-winning short film "The Final Resolution" screened at 15 international film festivals and earned him a slot as a finalist in the Project Greenlight Directors Competition. "The Cook" is his first feature length film and it's filled with boobs and guts. The story revolves around a sorority house over a long weekend and the handful of girls that stay behind for three days of partying, sex games and strangely delicious meals prepared by their odd new chef. The sisters start disappearing and the remaining ones 'find themselves trapped in a nightmare of graphic slaughter, involuntary cannibalism and heaping helpings of gourmet nudity'. Sold!

So, a lot of low-budget horror gore hounds are not going to like "Sweeney Todd - The Demon Barber of Fleet Street

", but it is a horror... and it does have gore. Admittedly, it does take a bit to get over the fact that they sing throughout the whole movie and I'm not really a big musical fan, but... look, it's the best movie that came out of the "Best Movie" category at the Oscars as far as I'm concerned and the story is great. Did you know that they actually had to cut some of the movie to get an R rating? The American cut focuses more on Johnny Depp than the gore, so maybe you should check out the international cut for that extra 'je ne sais quoi'? Either way, culture yourself and watch it... as far as horror-musicals are concerned, we can only hope that "Repo! The Genetic Opera" is half as good.

" comes from indie writer/director Michael Morris, whose only other feature is "Last Seen at Angkor", although he's made a couple of shorts, also. I don't know too much about him, but it looks like he got his start as a P.A., then worked a bit as a D.P. before breaking into writing and directing... "Fear House" is about a group of friends and family who pursue an estranged writer to an isolated house, only to find that once they've entered, their own fears will kill them if they leave.

James Van Der Beek in a movie about a giant squid, must be a Sci-Fi Original... "Eye of the Beast

" is, in fact, a Sci-Fi Original and it comes from director Gary Yates and writer Mark Mullin. Gary Yates is actually an award winning Canadian director and "Eye of the Beast" marks his inaugural move into horror, even though he quickly followed it up with another Sci-Fi Original, "Maneater". Mark Mullin wrote another Sci-Fi Original, "Something Beneath", as well as "Extreme Ops". I'll tell you what, once you get in at with the Sci-Fi channel, you're in. "Eye of the Beast" is about a government scientist who is sent to investigate a reported story of a giant squid that appears to be devouring everything within sight and scent... and he uncovers a one-ton, tentacled terror with its eye on a new feast... man.

" comes from first time director Rufus Chaffee. From what I can tell, from reading their press kit (which you can find here), it looks like a few of them got together to write the script, then they did some auditions, built up a bit of a reel, then managed to secure a bit of financing. Enough, anyhow, to shoot it on High Def, get a decent light kit and get some audio design and a score put to it. Shot entirely in Ware, MA, it takes place in Ware and is about four friends who fight an insane man's crusade to eliminate sinners from the small Western town.

" comes from writer/director Jerry Williams and it was originally part of the Tomb of Terrors package, but now it's getting its own release. It stars Conrad Brooks, who's been in so many crappy horror films, I can't count them, and it's about the tormented dreams of insomnia patients, which have a terrifying connection - they all dream of a murderous clown called Purvos, who's very real and closer than anyone would ever had imagined.

" is actually a few years old, it came out in 1999. I usually don't cover movies that are older, as I like to concentrate on the newer, indie stuff that comes out, but... this deserves mention. Directed by Heiko Fipper's (it's the only thing he's ever done) "Das Komabrutale Duell" could be the bloodiest and goriest film ever made... and it's being called a 'gem of an amateur splatter gorefest', 'sit down, open some beers and have fun watching the characters kill each other in the most bizarre ways'. Okay, I might just do that...

" is from writer/director Felix Diaz and it was supposedly filmed over a 24 hour period... so, I'm thinking it's as indie, micro-cinema as it gets. Diaz's only other film is "Superhero Excelsior", a rock n roll, superhero comedy, which had great reviews. I haven't seen "Hell's Threshold" yet, but I'm interested to see a micro-budget film that was shot over a 24 hour period... I think I'll keep my expectations low.