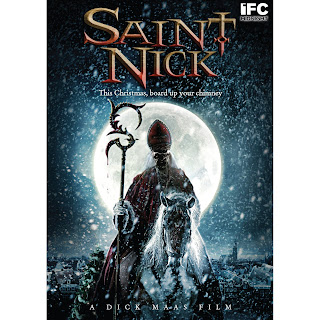 It looks like there's only a couple of notable horror films coming out this week, the big one being the 2011 "Straw Dogs

" remake of the 1971 Sam Peckinpah classic film of the same name...  This one is written, produced and directed by Rod Lurie and, well, I haven't seen it yet, so I'll reserve judgement.  Reviews were shitty, though.

We also get a new Christmas/Slasher flick, "Saint Nick

"...  which is actually about "Black Peter", a personal favorite fairy tale.  In fact, I'm a little choked because I've always thought this would be a good idea for a film...  I know what you're thinking, what's the idea?  Well, we all know Santa, right?  However, how many of you know about Zwarte Piet?  He's the guy that rode the white horse Sleipnir and flew through the air as the leader of the Wild Hunt... Don't know him?  Well, those tales came before the whole Christianity thing, let alone Christmas.  Anyhow, the story evolved and, eventually, he became "Black Peter", which is, of course, a translation of "Zwarte Piet" and he's the anti-Santa.  If you were good, Santa brought you gifts.  If you were bad, Black Peter threw you in a bag and beat you with sticks.  It looks like "Saint Nick" twists the story a bit or goes off a slightly different legend, as this opens with Saint Nick and a bunch of Black Peter's on a murderous spree, kidnapping kids, raping and pillaging in 1683AD.  Then, I assume he gets banished and returns in modern time.  Long and short, I've known about old Black Pete for a while and always thought it would make a good Christmas Slasher flick... now, here it is.  It's a Dutch film and it's a bit different from my imagination of it, so there's always room for a North American version.  Maybe we can still get away with making it... hmmm.  Any takers?  Who wants to make this with me?  Anyone?  Buller?

There was a bit of other news out there that I found interesting...  A New York man was just given one year in prison for being the guy who uploaded the pirated copy of "X-Men Origins: Wolverine" back in 2009.  I watch all this quite closely, as I think that torrent sites are great for indie and micro film.  Obviously, the studios hate the torrent sites, as they think they're stealing money out of their pockets... which I don't necessarily agree with.  I think a lot of people that download movies for free wouldn't pay for them, so they're just additional eyeballs... not lost revenue.  As for indie and micro cinema filmmakers, I think the torrent sites can act as a great marketing vehicle.  How many small films got popular because they're on there?  I can think of a few off hand - "Ink", "Troll Hunter", "A Serbian Film".  Granted, the festivals played a big part for those films, too, but whatever...  I think we should all watch this space closely, as I think the technology could be an integral part of indie film's future.
Posted by Dead Harvey at 10:13 AM