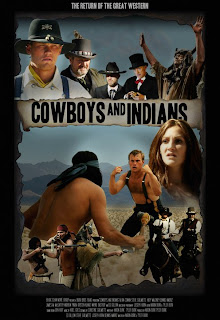 Alright, I'm going to admit that it's going to take more than a few days for me to get properly up to speed.  I haven't even started on my inbox, which is going to take a while...  However, I do want to get in the habit of posting new things regularly.  In the next day or two, I'll post about some of the things that Brad and I have been working on...  and, hopefully, by early next week, I'll get in a groove and start talking with some of you indie filmmakers out there.

First off, I want to make a point of mentioning a film that the Burk brothers, Aaron and Ty, have recently made called "Cowboys and Indians".  They're good friends of ours, we went to film school together, and they did a hell of a job on this indie flick.  I don't want to get into it too much here, as I do plan on doing a Q&A with them, but do them a favor and click here to go to the film's Facebook Page.  Check out the trailer and like it to keep up to date on what's going on with the film.  It's being released in the new year through Screen Media Films and we'll definitely keep you posted, too.

Speaking of what's coming out on DVD, this looks like a good week for indie horror...  "Zombie Allegiance", "Porkchop" and "Santa Claus Vs. The Zombies" are all new this week.  Go look for them on Amazon.
Posted by Dead Harvey at 8:34 AM