The Weekend at the Box Office, Horror Gets Slaughtered Again 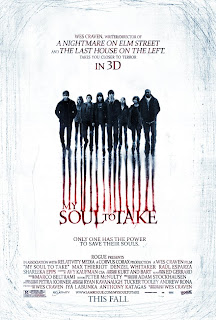 So, "The Social Network" won the weekend again, beating out newcomers "Life As We Know It', "Secretariat" and Wes Craven's "My Soul to Take". I guess that the lesson out of "The Social Network", if you can take a lesson out if it, is that you can be successful if you can spin or unveil something about something that's very popular. Very successful. But, I think that goes without saying - filmmakers have been doing that for years. On top of that, though, with "The Social Network", you've got a top-notch director in David Fincher and a top-notch writer in Aaron Sorkin AND they put together a great marketing campaign around it... The other thing is, who's the primary users of Facebook? Well, it's the primary demographic of movie-goers, isn't it? Really, the film is a perfect storm. I'm not sure what you, as an indie horror filmmaker, can take away from that, but it's just interesting to note that all the pieces fit together really well for the film. I don't know, try to be topical, I guess.

Since we're talking about films that do fit together well, let's talk about films that didn't fit together well - what the hell happened with "My Soul To Take"? You'd think it would do alright... written and directed by Wes Craven, it's in 3D and it was the only horror that came out AND, it bombed. Pretty sad, as it's the first film that Wes has written and directed since 1994's "Wes Craven's New Nightmare". Did anyone see it? If so, was it as bad as people say? It didn't screen for critics, which generally means that the studio thinks it sucks. Also, the film was not originally intended to be in 3-D, it was one of those films that they converted... and I'm wondering if that trend is done. Who knows? I haven't seen it, so I don't want to pass judgement on why it failed until I do. However, I didn't see much marketing or advertising for the film, so that may be part of it's problem. Either way, poor Wes...

Alright, back tomorrow with news of the horror DVD front.
Posted by Dead Harvey at 8:02 AM

This movie gives me shivers,come on isn't that bad at all.