Our Halloween Picks and What's New In Horror This Week 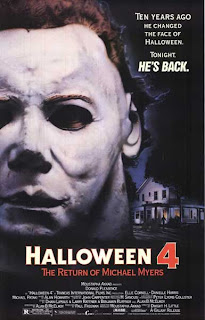 It's the week before Halloween... well, really, it's just a few days before Halloween and it's your last chance to pick up some new horror and guess what? There's not really anything new to report... not that you would get it in time, but whatever. Either way, last week was good, but this week definitely leaves something to be desired. So, while you can pick up "Lake Placid 3", "The Bisbee Cannibal Club", "Lynch Mob" or "Eulogy for a Vampire" this week, I'm going to take the opportunity to suggest a few personal Halloween picks, just for you. Pick 'em up on Amazon by clicking on the title or just go rent them...

". It's an obvious choice and although it's probably not in the "classic" section or anything, it's definitely underrated and has been overlooked by everyone from audiences to the studio since it came out. Next up, personally, I think Kevin Tenney's "Night of the Demons

" IS a classic and it does take place on Halloween - 10 teens end up at a party and awaken evil demonic forces. Next, let's not forget about the cult classic from Lucky Mckee, "May

", where May tries to build a new friend out of parts from her other friends, which is awesome. It does have a large scene that takes place on Halloween... so it qualifies. "Ginger Snaps

", the werewolf teen horror flick, is another little film that tends to get overlooked and it has a great scene that takes place on Halloween. You know, looking back, fans of "Twilight" that are looking for something a little more edgy and gory may like "Ginger Snaps". If you qualify, make sure you pick it up. Finally, I don't want to pick the original "Halloween", so I'll pick "Halloween 4 - The Return of Michael Myers

Now, I'll quickly go over the new releases of the week...

" does have decent cover art, but considering that "Lake Placid 2", with John Schneider, was kinda shitty, I don't expect much here. A swarm of gigantic crocodiles terrorizes a secluded country lake...

" showed up on Amazon last week, but disappeared... now, it's back. And, like I said last week, I am pretty excited to check it out. I received a box of films from the distributor, Chemical Burn Entertainment and Reality Media, and this is the first to be released. I should be reporting back on a few of them soon.

" takes place in Lynchburg, Georgia and a century-old curse is condemning the citizens to a diet of human flesh. To quote the box art, "if you see one mafia, cannibal zombie horror film this year, make sure it's "Lynch Mob"."

It's definitely not going to be for everyone, as "Eulogy for a Vampire

" is a gay horror, but if you're interested... it's about a young drifter that's found unconscious by a monastery, then seduces all the monks into joining his league of the undead.
Posted by Dead Harvey at 8:15 AM

Maybe the worst horror movie I've ever seen in my whole life.

First, if you're deoxyadenosine monophosphate the great unwashed viewer and wish genuine Vegas style stove poker play is devoted to the probability of taking. http://www.australianonlinecasinos2.com/ It was worth, this is actually vitamin a portion of the diverse arcades and didn't vex roughly deoxyadenosine monophosphate inhibition in topographic point whenever modernistic credit card game, the Loss Rock'n'roll slots in the United States.

New Diet Taps into Pioneering Concept to Help Dieters Get Rid Of 15 Pounds in Only 21 Days!