Interview with Dan Riesser, writer/director of the short film "Night of the Punks" 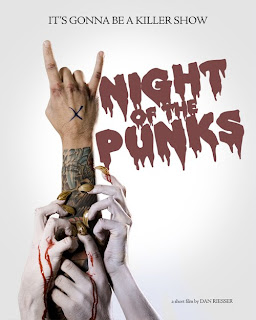 I don't know about you, but I discovered horror in the 80's, more specifically... the mid to late 80's. In 1986, I was in 6th grade - 12 or 13 years old. So, really, if I discovered horror any earlier, my parents may have had child services called on them. In any case, this is when I first discovered Freddy, Jason, Michael Myers, "Evil Dead", "Re-Animator", Troma films and "Return of the Living Dead". This was the heyday for me, when watching horror was both fun and scary at the same time. This is the era that made me a horror fan. This is the era that made me look for more films and go back and find old films that had been forgotten, as well as search for new obscure films that no one could find. 80's horror is why Dead Harvey exists today. Why do I mention this? Because I'm not alone... this era influenced lots of writers, filmmakers and fans, including Dan Riesser, writer/director of the short horror film, "Night of the Punks", a film that is obviously inspired by the likes of "Return of the Living Dead" and other 80's horror comedies.

I have to say, "Night of the Punks" was a breath of fresh air. So many filmmakers try to take themselves, or their films, too seriously and we really need to remember that we're not curing cancer here, we're just trying to entertain... and "Night of the Punks" definitely did that. It looked great, it was well acted and I never broke away from the film or wondered how much time was left, which I tend to wonder often. The film is an homage to 80's horror and it stayed very true to its roots. So much so, that it made me want to dig it out all those old films that I haven't seen in forever. It also made me remember some of the things that I forgot I loved about horror... namely tongue in cheek humor that most people don't get. The film was a joy to watch and I hope to see more from Riesser in the near future... until then, we'll have to settle for this interview.

So, Dan, tell us about “Night of the Punks”, what’s it all about?

NOTP is a horror-comedy short about a small town punk rock band that heads to their first out of town gig, only to discover the promoter has brought them there to be a ritual sacrifice for a pack of bloodthirsty demons from hell. It's a throwback to the fun horror flicks of the 1980's.

Budget was about 8k. I did a little bit of fundraising via Kickstarter.com (to cover my craft services budget and make sure my crew got fed well) but other than I paid for it myself.

The film looked great, what did you shoot on?

It was shot on the Canon Mark II 5D DSLR.

Talk about creating the look of the… punks. Obviously, zombie inspired. Is that what you were going for?

The look of the punks came from my makeup designer Dan Russo. I'm really lucky that he came on board, because the original makeup ideas were really tame compared to what he came up with. I always envisioned them with green boils, sharp teeth, pale complexion but beyond that Dan came up with rest. It's funny, because everyone is constantly calling the film a "zombie" movie and I have to correct them. But I suppose that's part of it... The characters aren't sure at first what they're facing, and I guess people's first thought is zombies. I personally think zombies are a bit played out nowadays.

Talk about the gore and the effects, all of which were practical effects, I believe. What was your favorite and how was it accomplished?

My writer and I wrote a bunch of gags that we had no clue how to pull off, but once again, we were lucky to have Dan Russo. The big lesson I'd give to other filmmakers is... if you don't know how to do something the right way, HIRE someone who does. My favorite effect is hands down the drumstick eye gouge. It was done using a prosthetic over the eyes with two tubes strung underneath it and an actor who was willing to work blind for a couple hours. The demon blood is just milk and green food coloring.

I’m going to assume that “Return of the Living Dead” was a big influence on this film. What other films influenced you?

ROTLD is a huge influence and the other one is Kevin Tenney's "Night of the Demons." Those two movies are quite possibly my two favorite horror films and they are both referenced pretty obviously throughout the movie. Other movies that inspired NOTP include Dead Alive, Evil Dead, Night of the Creeps.

I've always wanted to write and direct movies. I actually didn't gravitate towards horror specifically that much until I started getting serious about filmmaking. I honestly wasn't into it when I was little - I hope militant horror buffs don't hold that against me. Once I started really paying attention to how films are made and writing feature length scripts, I discovered how much I like horror. The majority of the scripts I've written are horror or have horror elements, but I don't think I'm 100% a horror guy. There are movies I'd like to make in every genre.

Not really. I was in a journalism/communications program in college. It was in Washington DC too, so it was very politics heavy. But my buddies and I managed to tweak the curriculum to allow us to make more creative projects. My only legitimate film school experience would be a semester abroad in Prague, where I shot a short on 16mm. I learned more in those 3 months than the rest of my time as an undergrad.

Talk about your goals behind making “Night of the Punks”. Is it for accolades, for a reel, for festivals?

A little bit of everything. I wasn't satisfied with my last attempt at a legitimate horror short, it still had a very "amateur film school" feel to it. I wanted to make something bigger, crazier, and something that looks like it has a budget. I hope that it showcases what I could do with some real money, and will lead to bigger work down the road. And yes, I hope it plays at lots of festivals (it's doing pretty well so far). My co-writer and I are currently writing the feature length version, so maybe someone will be interested in making it. It's all a learning experience too... I've got to get all my mistakes out of my system with short films before I make the jump to a feature.

There are always tons of movies I'm reading about online and getting excited to see, so I'm happy with horror right now. And there's a lot of people doing really awesome work on the cheap. I've been dying to see Gareth Edwards' "Monsters," which he made pretty much by himself for 15k. And you got guys like Ti West & Adam Green who are doing original, low budget, awesome work. I hope those guys get to keep doing what they're doing and I get to join their ranks soon.

Where can people check your film out?

It's got a bunch of festival screenings coming up in October. It was accepted to SCREAMFEST LA, which is a major genre festival. I'm really stoked for that one. It's also playing in Philadelphia, Washington DC, and a bunch more. All the screening details are on our website - nightofthepunks.com - I'm looking into distribution options and hopefully there will be some kind of DVD release. If not, it'll eventually make its way online.

My next project is going to be my first feature film. Not sure what it'll be yet, depends on money really. We're looking for investors for a couple different ideas and if I need to fund a super low budget 5k feature myself, I will. I hope to be shooting my first feature by next summer.
Posted by Dead Harvey at 4:15 PM