This Week In Horror DVD's 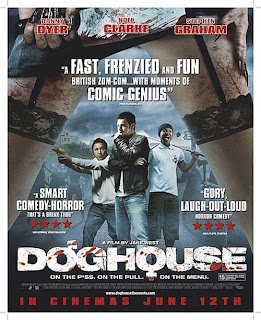 I know, I know, it's Thursday afternoon and I'm just talking about the horror out on DVD now. It's been a busy week and I'm doing my best... I'll try to get things back to normal next week. However, there may have to be a "new normal", as there's been a few changes in my life that are going to effect how I allot my time. All good, so no worries... Anyhow, let's look at the notable new releases this week.

I'm both a fan of Jake West and Danny Dyer. If you don't know who they are, you NEED to check out Jake West's "Evil Aliens". It's simply awesome. Do yourself a favor, if you haven't heard of it, get it immediately. Don't hesitate, just pick it up. It's the best thing since Peter Jackson's "Dead Alive". As for Danny Dyer, he may not be for everyone, but I think he's hilarious. Check him out in "Severance", "Pimp" or the British rip-off of "The Longest Yard", with the cast from "Snatch" and "Lock, Stock and Two Smoking Barrels", called "Mean Machine". In any case, the two of them got together for "Doghouse

". If the above didn't convince you to check it out, maybe the premise of the film will... a group of men travel to a remote village to help one of their friends get over his divorce. Once there, they discover that the town is inhabited by ravenous women that have been infected with a toxin that turns them into man-hating cannibals.

If you saw the title "S&Man

", how would you pronounce it? I just assumed it had to do with sex and it would be pronounced "Ess and Emm Man". Well, it's not. It's pronounced "Sandman". Yeah, look at it again. It makes sense. It's a documentary that came out a few years ago and it's about the underground subculture of horror films... but not your regular horror films. It deals with the voyeuristic nature of faux snuff films and the desensitizing of modern society. I haven't seen it, but my bet is it's heavy handed.

" is an Australian film that came out around a year ago in the land down under. IFC films picked it up and had an on-demand release in January, then another on-demand release in February. Now, it's out on DVD. It's in the vein of "Fatal Attraction" and "Cape Fear" as it's about a kid that sleeps with a married woman, who subsequently gets pregnant, and he turns from obsessive to psychotic.

" is the film that was produced by MTV and is based on the MTV show, "My Super Sweet Sixteen". The film aired on MTV, but was apparently cut down... and this DVD version is unrated, so it contains a bit more gore. What's funny about this film is that horror fans don't dig it that much. However, MTV audiences loved it. It was the #1 film in its time period and delivered the network's strongest ratings in that time period in over a year and a half. It was so popular that it spawned a sequel... which comes out a week from now on October 22nd.

" is directed by Kevin S Tenney, who's done some classic films. He's directed "Witchboard", "Night of the Demons", "The Cellar" and various others... I don't know much about this film, but I'll take straight from the DVD cover. "An alien parasite hungry for human hosts... The infected rising from the dead, ravenous for brains... A group of desperate misfits battling for survival... someone has a really bad travel agent!"

Lastly, I really want to know more about "Meet Me Out in the Sticks

". The cover art is really creepy and all it says is that the actors, director, writer and producer is someone named Creep Creepersin. It comes from Creepsville Entertainment and it's only 3 minutes long... when you order it, it's manufactured on demand using DVD-R recordable media. Obviously, I'm not going to pay the $10.99 for a 3 minute film, but does anyone know more about it?
Posted by Dead Harvey at 3:45 PM