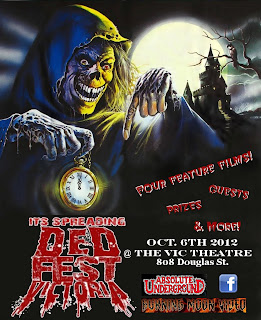 It MUST be October...  because I'm getting lots of requests to promote horror film fests.  I'm more than happy to give time to all of them, too!  I'm posting info on this one now, as the fest is actually next week.  It's not one you can enter, but they are screening some cool flicks.  I haven't actually seen "V/H/S" yet, but I hear it's great and I'd love to check out "Famine"... if you're in the Victoria, BC area -- check this out.  If you're not, try to check out "Famine" and "V/H/S" wherever you can!

Organizer Ira Hunter of Absolute Underground, Burning Moon Videos and Zombie Walk Victoria are pleased to announce the return of Dedfest Victoria! This is a film festival running into its second season and the schedule for the film festival is hosted below:

“Just when you thought it was safe... we're back!”

In conjunction with Dedfest Edmonton, Victoria will be premiering the slate of Dedfest films with the Victoria Dedfest Horror Film Festival. This event begins Saturday, Oct. 6th, following the Victoria Zombie Walk on the same day. This is the second year for the film festival!

Victoria Dedfest will screen 4 feature films: Night of the Living Dead, Creepshow, V/H/S, and Famine. A special guest director, Ryan Nicholson, will be in attendance for a Q & A after the final screening. Plus, there will be: prizes, vendors, vintage trailers and more!! The schedule:

7:30 Screening:V/H/S (2012)
This is an insane found footage anthology, which has been called "the scariest, rawest horror film of the year!" *this is the film’s Provincial Premiere!
Trailer: https://www.youtube.com/watch?v=7LfLDeXLmAw

9:30 Screening: Famine (2012)
This film is an over-the-top new slasher/comedy feature from Canadian splatter king, Ryan Nicholson of Gutterballs, and Hanger fame. This will be the film’s British Columbian Premiere! The filmmaker will be in attendance!
Trailer: http://www.youtube.com/watch?v=5LDoBN217-w