A Look At Breaking Glass Pictures, Distributor of "Hanger", "Run Bitch Run" and "Ticked Off Trannies" 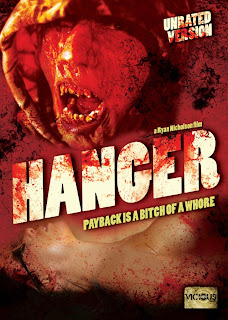 It's been a while since we added a new distributor to our list, but we recently added Breaking Glass Pictures... To be honest, I'm not sure how new they are, but they came to my attention after checking out "Hanger", which is a pretty good indie horror flick.

So, they were named after David Bowie's 1977 hit song and were founded by Richard Wolf and Richard Ross... odd that they're both named Richard. I wonder if they've ever been called the two Dick's? Anyhow... they stick to provocative and challenging films of all genres, namely horror, gore, LGBT and the odd erotic drama. They also distribute up to twelve titles a year through their new specialty horror label, Vicious Circle Films. Their first film under that label was the afore mentioned "Hanger", which is about a botched abortion that lives and seeks revenge. They also released "Run Bitch Run", which is slowly turning into an indie cult classic.

They have all their contact info on their site, which you can find by clicking here. If you're looking for a distributor, just head over there and start emailing them. It can't hurt! If you want to check out all the other distributors that we've covered, head on over to our section called "Indie Horror Distributors", you can go directly there by clicking here.
Posted by Dead Harvey at 8:24 AM

Quite helpful information, thanks for your article.