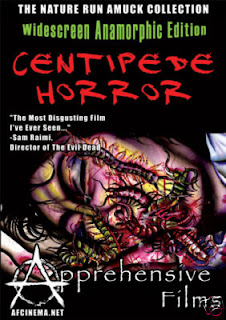 I totally forgot to put the Amazon links in with my last post... if you've been scrambling around for the last few days, desperate to find links to those two films... you can relax, I've added them. Now, since we're talking about my last post, I'd like to mention Apprehensive Films, which distributed the film "Colony of the Dark". I was on their site and came across something interesting...

Maybe I should go back even further... Look, I've said it a thousand times and I'm going to be right... one day. I guess it's kind of like that old saying, even a broken clock is right once a day, but... I think that indie film, especially indie horror, is on the verge of breaking out. And I'll keep saying it until it does. However, there's a couple things that are holding it back, one is distribution and the other is awareness. If I win the lottery... or someone wants to pay me a handsome salary, I would dedicate my days to solving both problems and I could solve them... However, until that time, I'll have to keep my day job and do this on the side - fighting the good fight for indie film, a half hour here... a half hour there. Anyhow, awareness is something that is going to be an issue - how do you differentiate indie horror from mainstream horror and attract a new audience? Indie horror does have a dedicated audience, but right now... supply outweighs demand. There's just too much product. We need to build that audience. As usual, I have ideas on how to do it, but... I'm just a guy with a blog.

Distribution is the other thing. Currently, in most cases, the indie filmmaker is getting screwed by the distributor and if an indie filmmmaker wants to distribute himself, he doesn't have the weight or clout to really be successful. They don't know it, but the way that most distributors work is actually holding back the entire indie horror scene. They need to break out, try new things... what they're doing now isn't helping anything but their coffers. Anyhow, back to Apprehensive Films... when I was reading up on them, I couldn't help but notice a section on their site called "distribution options". So, I checked it out... and they do have a cool spin on it. Basically, they do have the weight and clout to get in to big retailers, but they want you to take on the risk by pressing your own DVD's and, well... paying them. I don't think it's THE answer and I won't get in to why, but I do think it's a good option for those that are having trouble dealing with distributors that don't want their film and don't want to do the hustle of distributing themselves... and, of course, you'll need to have a few extra thousand dollars to burn.

Here's a link to their "distribution options", check it out. It's a good little read, even if you're not currently looking to distribute your film.
Posted by Dead Harvey at 8:35 AM

I just wanted to let you know that The Horror Zine is now reviewing dark or horror independent films. Please contact me if you are interested in having your film reviewed by The Horror Zine.
Thank you,
Jeani Rector, Editor
The Horror Zine
http://www.thehorrorzine.com

I don't understand what you said, but I'm agree with it!