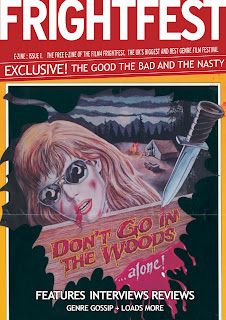 I'm not going to lie to you, life's been busy lately... and because of that, there's been a recent lack of regular posts. What can I say? New job, new responsibilities and I'm just trying to figure out how to rebalance my life. It happens every now and again. Because of that, I'm struggling with the fact that I'd rather produce a decent post than just rip one off a few times a week and I really don't want to post something that's useless. I did, however, recently receive a very intriguing interview back from Dr. Karen Oughton... finally, something decent to post.

We usually talk with indie horror distributors and filmmakers, but Dr. Oughton is a little different - she's basically a horror aficionado. She's writes, she reviews, she does commentary and, because of all that, she knows a thing or two about the whole scene. In fact, she's just the type of person you want to hear from if you're a filmmaker. She's completely unbiased and she studies the industry - when I figured that out, I figured we should ask her a few questions. Trust me when I say, it's a worthwhile read if you're a filmmaker. However, before you read the interview, feel free to read up on her. You can check out her two websites by clicking on these links: horrorfilmreview.co.uk and karenoughton.co.uk. After you're well versed, check out the interview...

Tell us about the FrightFest and what you do with the festival.

I’m organizer Ian Rattray’s assistant. I write the “Who’s Dead” obituary column, articles and reviews for the e-Magazine and have helped with the editing and checking processes. I was also let loose to coordinate the stage lighting and microphones and liaise with guests before they went on stage for the introductions and Q&A sessions.

Tell us a bit about yourself. What got you into the horror scene?

I’m a journalist, lecturer, commentary provider, film promoter and long-time horror nut! I was hooked by The Pit and The Pendulum when still in pigtails. These days, I love anything that is done well, from The Haunting to A Serbian Film and to Beautiful Girl Hunter (AKA Star of David). I got into the festival circuit after attending the Celluloid Screams festival to take my mind off my PhD exam the next week – replacing one horror with another!

There are some great films screening at different film festivals this year. What are the highlights? Which films really rattled the cages this year?

It has been a varied year in terms of both films and festival audiences. We had everything from giggles ‘n’ gore crowd-pleasers like Hatchet II through to infamous offerings like A Serbian Film and I Spit on Your Grave. These latter two are interesting not only because of their subject matters and the stylistic reasons they incurred the wrath of the British Board of Film Classification, but also because of how different audiences reacted to them. I have seen I Spit on Your Grave three times with different audiences, one looked extremely uncomfortable at the milder sections, one didn’t seem bothered either way, the other cheered through all the nasty bits! A similar thing happened with A Serbian Film. People either picked out the comic elements, understood it as a serious social commentary or saw it simply as an attempt to make the sickest film of all time. Personally, I think it is elements of all three.

A surprise cage-rattler was Jake West’s Video Nasties: Moral Panic, Censorship and Videotape documentary, but for all the right reasons. It got a particularly good reaction (I suspect) because it is entertaining, is about films people love and (sometimes!) respect, and because the contributors were so enthusiastic. They took part in a fantastic discussion panel at FrightFest. It bought home what a political act a film festival can be, and frankly what we have got to be grateful for. It was brilliant to see the contributors - academics, journalists and directors - mobbed by the world’s politest crowd as soon as they got off the stage. In England that kind of reaction simply isn’t that common an occurrence. The contributors were stunned by the attention as they had done only what they felt was right in standing up for these films when all around were claiming they were corrupting society. It was such an amazing moment.

You also provide audio commentary for Lionsgate. How did you get into that and what’s that process like?

I went to the Celluloid Screams Festival in Sheffield, England and went to a screening of Neighbor. Being an academic specializing in film, I got talking to the producer, Charles St John Smith, afterwards and he invited me to put some ideas together for an audio commentary and a few other marketing tools. He gave me free reign, so after doing some interviews with him, director Robert Angelo Masciantonio and key cast members, I did what I’ve always enjoyed watching but rarely see - a commentary that talks about what is happening, when it happens. People don’t often do it like that because it’s fiddly. I watched the film a few more times to work out what sections needed notes and how long I had to talk about them. I then went into the recording studio, put the DVD on silently and read some of my notes at the right times, but riffed the rest from scratch and sometimes included information I had been given by the producer and director. I tailored my tone to fit the film – sensible when it was serious, playful when it was funny, and down right filthy when The Girl got going! I’m used to public speaking, so most of it was done in one take. When we’d finished, we did some editing work and sent the whole thing through to Lionsgate, who approved it.

Talk about where horror is at right now. What trends do you see going on and where do you see things going?

Well this year it was all about the different guises of gore, gore, gore! FrightFest was a really good indicator of this, as it showed how gore is used in different subgenres of horror. There’s homage horror in the veins of Hatchet 2 which makes the appreciation of the execution of the gore (ewwww!) a main part of the audience’s experience, there was the fabulous F, which shows a trend towards the incorporation of horror into real life scenarios (as could also be seen in Cherry Tree Lane), and there’s supernatural shocker in films such as 13 Hrs.

In terms of the future, my guess is that we will see two distinct strands of scream films: those that continue in the shrieking with laughter slasher vein and an increasing focus on serious subjects. Horror is becoming more widely appreciated. In the past, (as I found out when researching the “Who’s Dead” Obituaries column for FrightFest Ezine), horror films were what you did to gain experience - a number of mainstream industry professionals had horror films buried down in the darkest depths of their CVs. Now it has gone mainstream and A list actors like Harry Potter’s Daniel Radcliffe and Tom Felton are appearing in features and Dr Who’s David Tennant is currently filming the Fright Night remake! It’s taken seriously as a genre now, is featured on university courses (including mine!), and it’s becoming far more acceptable to like even the more hardcore stuff. This is great because it means that horror can continue to develop and give fans just what they want, be it a horror-action flick, a slick slasher, a really great ghost story, or indeed anything else in between. And the best thing is that more and more films are coming through that are so good at turning the thumbscrews they blow everything else away.

Now, as we’re a site about indie horror, let’s talk about low-budget, indie horror. In your opinion, what does it take for a film to break through and have mass appeal?

Well, I’ve seen one heck of a lot of indie horror and wrote a review of the Raindance Film Festival for the FrightFest e-Magazine this year, and from what I can see there is really only one absolute necessity: decent actors or character representation. They don’t have to be playing serious characters but they do need to buy into the scenario they’re portraying. If they do, the film is probably going to be watchable and, importantly, remembered. If they don’t, it just becomes another low-budget blood and bore-fest. Of course, this is discounting the whole issue of luck and being seen in the right place at the right time, but having just turned off a great indie film with a good premise and great camera work but absolutely awful acting, I’m becoming more and more convinced that if you don’t have the actors to convey it, even the best story will just die. Horribly. In great pain.

Well, I’m writing for film magazines including Fangoria and Scream: The Horror Magazine, am scheduled to appear as a special guest on a few radio shows (I can’t say which as they’re making a formal announcement soon), am developing a new horror review website and am in discussions over one or two film projects. I also teach media communications (including film studies) at Regent’s American College London (Webster University). If I’m not laying awake in the night thinking about what might go ‘bump’, appear or bite, there’s something wrong!
Posted by Dead Harvey at 8:12 PM