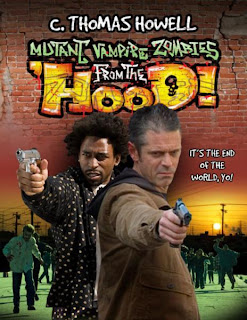 Hey, I know you... you're that indie filmmaker with that idea in your head and you want to get it out, right? Yeah, right now, you're wondering how in God's name you're going to get this thing done. You've come to the realization that there's going to be lot of hurdles between the point where you were drunk at the bar and an idea emerged and the point where you're going to see that idea in a box on a shelf at Blockbuster. Well, look, most hurdles pose questions that are easily answered: where do I get equipment, crew and actors? If you can't answer those questions, just go back to the bar and keep thinking or... drinking, whatever makes you happier. However, some questions aren't that easily answered: how am I going to afford this and how do I get it distributed when it's finished? Well, I can't help with financing, but I can help with distribution... sort of.

In our ongoing quest to bring you as much knowledge about the indie film world as possible, we've been talking with indie filmmakers, producers and distributors and sharing what they've learned with you. Today, we have a great interview with Trevor Hirsch of Seminal Films and if you're the guy that I was talking with in the first paragraph, you're going to want to give this a read. Seminal Films is LA based and they specialize in indie film acquisition and production and they have an exclusive DVD output distribution agreement with Entertainment 1, the world's largest indie CD/DVD distributor. They distribute various genres of films, but horror is one of their key genres, having distributed such indie horror films as "Ninjas vs Zombies", "Clownstrophobia" and "Mutant Vampire Zombies From the Hood". Trevor offers up a great interview and if you're interested in the distribution process from the eyes of the distributor or you're interested in making a film that's more easily acquired, you should give this a read.

Tell us about Seminal Films. How long have you guys been around and what do you guys do?

Seminal Films started in 2009. We are primarily an acquirer and distributor of independent films, with our aim being to maximize viewership of moving pictures and profits for filmmakers. Mathius Mack Gertz, the Vice President of Acquisitions, handles the majority of our film acquisitions and sees them through the entire process from screening the film all the way up until the film’s release. We have a strategic DVD output arrangement with the Entertainment 1, the world’s largest independent DVD/CD distributor in the world. Our films are subsequently released on DVD to a number of different media carrying outlets, and are available on Video On Demand through various internet and television outlets as well.

How about yourself? What got you into film and how did you end up with Seminal Films?

I personally just recently joined Seminal in February after the company relocated from Edmonton Alberta, Canada to its new offices located on The Culver Studios Lot in Culver City, California. I previously attended the University of California at Santa Barbara’s Film and Media Studies Program and worked in various production and development roles within the film and television industries. I now do the marketing and manage Seminal's various site - seminalfilms.com -youtube.com/seminalfilmspresents etc..

What made me want to work within the industry is film’s unique ability to inform, inspire, and entertain in ways no other medium is able to.

Mathius Gertz became Vice President of Acquisitions in 2009. A graduate of the USC School of Cinematic Arts, Mathius has produced a number of films and worked in nearly all aspects of the film industry.

Seminal distributes a wide variety of films, including: documentaries, comedies, dramas, family films, reality and, of course, thriller/horrors. From a financial standpoint, which films do best?

Much is dependent on the quality and marketing of the film. I wouldn't say one genre is vastly different from any other, however the horror genre has produced films for us that meet and in some instances exceed our expectations.

What are the different ways that Seminal acquires films?

We acquire directly from film makers, through sales agents, and in concert with other distributors.

When you're acquiring a film, what qualities are you looking for?

Briefly take us through the distribution process. You just acquired a low-budget horror, now what?

Our distribution is a hybrid. We collaborate with the film maker to design art work. They will send us screeners to send out to reviewers as well as buyers at Walmart, Blockbuster, Amazon, Netflix, etc.

We will design sell sheets to go in books that are sent to retailers and we will customize marketing to take advantage of psyco-specific niches in the market place. In addition, an on-line campaign will be drawn up and implemented by our IT department. If the film maker is inclined, we will help them do a limited theatrical release as well.

I'd assume that the process of distributing a film differs from genre to genre, talk about the differences in distributing, say... a drama versus a horror?

There are definitely differences in distributing different genres. The horror genre is unique and different from many genres in that it has such a cult following and there is a genuine fanfare amongst those in the horror community. With a drama there is usually more of a focus on who is in the movie, if the acting is solid, if the story comes together, and whether it has had success on the festival circuit. With a horror film, it is more about the film’s take on certain aspects of the horror genre, the aesthetics, its originality, and whether it produces an excitement amongst viewers.

What are some common mistakes that filmmakers make and, if you could pass one piece of advice on to filmmakers, what would that be?

If you want to make a film that is a passion project, don't worry about the distribution. Just make it, do the festival circuit and move on.

However, if your goal is to fill a niche in the marketplace, you would be advised to get advice from a number of people in the industry as to what the market needs. Then write your script and make your film with that in mind. Most people in this business will give nearly anyone fifteen minutes on the phone to help them in their career. You just have to have the confidence to ask. My one piece of advice is that once you find what the market needs and you have the script to fill it and you are putting a budget and funding together, make sure you budget for one or two actors with some marketing potential. Even if you have to raise the budget a little or knock something else out. Retailers want names that people know. It is a whole lot easier to sell a good horror film with Gary Busey in than without. Also, remember that this is a collaborative medium. Don't do everything. The film will probably turn out better if someone other than you shoots it and edits it. Lastly, the best kind of film to do for the home entertainment market is one that is evergreen. family films, Christmas movies and horror films with plots that incorporate Halloween or Valentines Day.

Talk about the state of indie horror. Where is it now and where do you see it going?

I think the state of indie horror is in a great position right now, thanks largely in part to the internet, social networking, and word of mouth within the horror community. People have a fascination and dedication to the horror community that is unlike that of any other genre. What is great for indie horror filmmakers is that it is possible to create great horror films on a limited budget if you are skilled in the filmmaking process and have a great idea.

Talk about the future of Seminal Films, what's your plan over the next few years?

Short term we want to distribute about fifty films a year for the next two or three years and then start making some of our own. We also want very much to put money in our filmmakers pockets. We believe that a hybrid distribution model like ours is the way of the future for indie film, Combining the best of traditional and self distribution models.
Posted by Dead Harvey at 8:29 AM

Very good interview. You are certainly bringing the distribution side of the industry into terms that we call all understand.

I like use viagra, but this no good in my life, so viagra no good.

In my opinion one and all should browse on it.