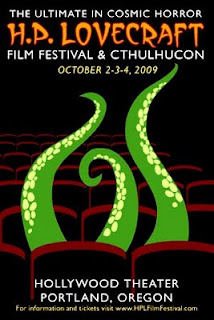 A bit of good news from my camp... I officially finished the first draft of my latest script. Now, it's not in any condition to show anyone, but it's done - 109 pages of raw, unpolished screenplay. I'm going to take a few days off from it, then take a few passes through it and fix it up a bit. Then, it'll go off to a few trusted sources and I'll take it from there. When I first conceived of the idea, which was basically a modern take on "Taxi Driver" with a bit of Lovecraftian angle, I had the whole story plotted out in my head... then, you know how it goes. I wrote out the treatment and promptly dumped my Lovecraftian angle. Then, as I'm writing, a few more changes, add a character here, change the ending a bit, move this, alter that and, guess what? The whole thing is completely different than what I originally conceived. I don't know if this happens to you, but, to quote Indiana Jones, "it happens to me all the time". Anyhow, I'm pretty happy with it... at least until I get feedback. Now that I'm taking a short break from that, I can try to tackle my inbox and, quite frankly, that's a far scarier place than anything I can come up with. In keeping with last week, I'm going to pass on some new information from the festival world.

So, Horrorfind Weekend is coming up in September, it takes places over the 3rd-5th in Gettysburg, PA. Horrorfind is a great mix of everything, they have a film festival, they'll have celebrities, events, seminars and parties. According to their site, the best way to describe the weekend is like this, "P.T. Barnum had "The Greatest Show On Earth" with his circus, Horrorfind has "The Spookiest Show On Earth" with the Horrorfind Weekend". If you live on the East Coast, it looks to be a great one to attend. In fact, it's not too far from my parents place... I may have to plan a visit around then.

Scarefest is a ways away, but they've already wrangled up some pretty big stars. The horror & paranormal convention takes place in Lexington, Kentucky from November 5th to 7th and, already, they've got George Romero, Adrienne Barbeau, Amelia Kinkade and Tom Atkins swinging by. The cool thing about this festival is the fact that it's also a paranormal convention, so they have psychics, ghost hunters and demonoligists there, as well. They actually don't do a film festival, so to speak, but they do have screenings... I think.

The H.P. Lovecraft Film Festival & CthulhuCon has a couple things going on. They have the annual festival in October in Portland, Oregon, as well as their first film festival in L.A. in September. I like the fact that they're specialized, all submissions have to be influenced by or related to Lovecraftian themes or stories. Having said that, don't feel shunned... you'd be surprised how far reaching Lovecraftian themes and ideas can go. I mean, he's one of the godfather's of modern horror, after all.

That's it for this week, have a great weekend and we'll see you next week!
Posted by Dead Harvey at 9:46 AM