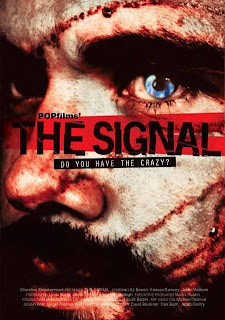 What do you know? It's another great week in horror... and it's mostly indie films. The first film I'm covering is definitely one of the best indie films of the year, so without further ado...

" isn't just one of the best indie-horror's of the year, it's also one of the years biggest indie-horror success stories. Either way you cut it, it's an f'ing good movie, but when you realize that its budget was only $50,000, you'll think it's downright awesome. It was made by three coloborating directors; David Bruckner (this is, pretty much, his directorial debut), Dan Bush (this is definitely his feature length directorial debut and he's now working on the upcoming "FightFuckPray") and Jacob Gentry (whose only other feature length directorial effort is "Last Goodbye"). The film is broken up into three parts, or three transmissions, where a strange signal being transmitted turns people crazy... and they go violent crazy. The three parts are distinctly different, the first part being almost a thriller, the second one is more horror-comedy and the last revolving around a love story. No question, it's a must see.

" comes from Tony Krantz and is the fourth 'Raw Feed' film from Warner Home Video. Now, check this out... Tony Krantz was the head of television packaging at CAA for 15 years and has been nominated for 4 primetime emmys, winning once and is credited as being the executive producer on such big-time tv shows as: 24, Felicity and The PJ's. Then, seemingly out of nowhere, he up and directed the first film for 'Raw Feed', called "Sublime" and now he's come out with "Otis". He's currently working on various projects, including a sequel to "Rest Stop", "Rest Stop: Don't Look Back" and something called "Inhuman". The guy must really dig horror... It may be his pull from working at CAA, but for a direct-to-DVD film, "Otis" has a lot of decent actors, including: Daniel Stern, Kevin Pollak and Jere Burns, among others. It's about a a guy who captures women, locks them up, calls them all "Kim", then when they don't put out on 'prom night'... he does some bad shit.

", which has received very mixed reviews, also comes out tomorrow. By that, I mean just that. Todd Gilchrist called it "unrelenting and brilliant" and Joshua Rothkopf called it "a sour project that defines anti-imaginative". By no means is it an indie film, either... it had a budget of $15Million and it feels like it could've been made for a whole lot less. Distributed by Warner Independent, it premiered at the London Film Festival, while it's US premiere was at Sundance and it finally hit the theaters on March 14th, 2008. ...and get this, it's actually a remake by the exact same writer and director of the first one, which came out in 1997 AND it's a shot-for-shot remake. I don't really know what to say about that...

", but was originally called "Living Hell" when it first aired. It was directed by Richard Jefferies, who's made a bit of a career as a writer, having penned "Cold Creek Manor" and "Man of the House", among others. However, he's only directed one other feature and that's "Blood Tide", which came out in 1982. So, it's been a while since he's helmed anything. "Organizm" is about a mild-mannered teacher and a hazmat specialist who have to figure out how to stop an unstoppable creature, a secret Cold War military project who feeds on light and energy and moves with exponential speed, before it destroys everything in its path. "Salvation" comes from J.A. Steel, who wrote it, directed it, acted in it, produced it, edited it, did stunts in it and was also the sword choreographer. It won't be a surprise, then, when I tell you that she was one of the first women in 1998 to train in the martial art of Muay Thai in Thailand. So, you could probably say this was a work of passion for her. The story has to do with a centuries old battle between the powers of heaven and the forces of hell colliding in a final, modern showdown... where girls swordfight.

" comes from writer/director Ryan Rossell, who also acts in the film. It's an indie-horror that screened at a few festivals, including the Hollywood Film Festival. Rossell wrote the script with intent to sell it, but when he gave it to his friend, Anson Scoville, to read, they decided to go out and make it instead. Scoville ended up producing it with Rossell directing and it had its premiere in 2005. "Black Wine" is about young love gone wrong... Something horrible happens before Trever, a third year law student, has a chance to propose to his longtime girlfriend, which propels them down a dark and twisted path, pitting them against each other and driving them to the point of no return. Wow, that is just vague enough for me to have to check it out...