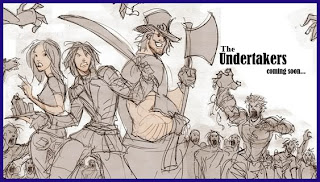 If you're looking to finance a film or a project and you don't know about Kickstarter, you need to get your head in the game.  By no means does putting together an awesome Kickstarter campaign mean you're going to be successful, but we're in a world where financing doesn't come easy and it's definitely worth a shot.  Not only that, there's lots of success stories coming out the Kickstarter world these days, but, to get there, they all need help getting attention.  So, I'd like to bring your attention to an awesome looking Kickstarter project called "The Undertakers".  We spoke with Kevin Head about the project and, you know what to do - support indie film, go over to their Kickstarter page and donate a few bucks!


Tell us about your project, what’s it all about?

There are certain places throughout the world that possess supernatural properties, where the dead inexplicably rise from the grave to hunt human flesh. Charged with defending this dangerous secret are a group of highly skilled agents in a private organization referred to as "The Undertakers". Their mission: to identify, segregate, and stand vigil in these dangerous areas preventing the possibility of a catastrophic outbreak.

The Undertakers will be set in a highly stylised world with dark-gothic elements. Our character and zombie designs are created with a Burtonesque feel, giving the film a touch of similarity to classics like Cemetery Man and Underworld.

But the emphasis is on story. The web series centers around the sacrifices these brave men and women make in order to protect the world each and every day, in total secrecy.

Oh, and let's not forget to mention the kickass zombie killing scenes in which our characters prefer the traditional weapons of old, so that they might kill silently and swiftly.

If you don’t mind us asking, what was the budget and how are you going to secure financing?

At the moment, we are producing a series of web shorts that will lead up to the storyline of the feature film. We have decided to take the unconventional approach of crowd funding (Kickstarter.com) for raising the budget for these shorts for multiple reasons. It allows us to connect with fans of the genre directly, and give once-in-a-lifetime type rewards for their participation in raising the funds. Those who participate can receive cool items like an "I heart zombies" T-shirt, replica LARP swords and signed posters. They can also receive exciting rewards like Skyping with Richard Hatch (Battlestar Galactica), Producer credits and even a chance to appear as a zombie in the series.

To find out more visit our kickstarter website: http://kck.st/KAoAmv

We are working to fund two separate groups of web shorts. The first has a budget of $28,000 and the second will be produced if we reach the goal of $55,000.

We are producing these web shorts for a couple of reasons. First, we want to give fans a taste of what the world of The Undertakers feels like. We have been producing artwork, short stories and screenplays for a couple of years now and have a growing fan base that has sprung from our exposure on MySpace and Facebook. This is mainly for them.

But, it also allows us to have something to show as we go looking for funding from production companies and investors for the eventual feature film The Undertakers: Road's End.

As of now we have no plans to enter the shorts into any festivals. It is mainly for use on our website and will be distributed on dvd to those participating in the kickstarter campaign. Hopefully, these little gems will become a little part of our success story, and coveted by those who have them.

You can find out more about The Undertakers by visiting our Kickstarter page: http://kck.st/KAoAmv, by "liking" us on Facebook to follow our progress: https://www.facebook.com/TheUndertakersinfo, or by visiting our official website: www.theundertakers.info.

You can only receive a DVD by making a small pledge on our Kickstarter page.

I've been a fan of the genre since watching the late-night double-feature of Night of the Living Dead and The Children at age 8 on Detroit television. I obtained a degree in Television Production at Ferris State University and became a post-production specialist, trained in editing, animating and camera.

About six years ago, I decided to follow my heart and pursue a career as a writer/director in feature film. My writing has garnered recent recognition, as I have been covered by William Morris Endeavor on the recommendation of Darren Lynn Bousman (Director of several films in the Saw franchise), hired by Zeitgeist Productions to pen a horror film now in development, and cultivated several invaluable relationships with recognizable actors with the desire to work on several of my projects. I have several other projects in the works, but this is the one closest to my heart.

Indie horror is in a very interesting place right now. With the collapse of our economy a few years back, production companies were forced to adapt. The result for Indie writers, producers and directors were fewer options and sales. The amazing thing for me is how filmmakers always seem to find a way. From the ashes of our economic despair comes a new platform like Kickstarter.com, which allows fans to decide what gets made and what doesn't.

It's a frustrating, yet exciting time for those of us working our asses off trying to get our films made.

Adapt or abandon your dreams.

There are a few other things in the works at the moment. As we adapt, learn and get efficient at what we are doing, others look to use that knowledge which has led me to the producing side. I'm planning to be associated with a few other web projects in the near future.

We are also gearing up to fund another film I have in preproduction entitled "Black Storm", which centers around a small community plagued by a group of malevolent entities trapped inside a massive dust storm.