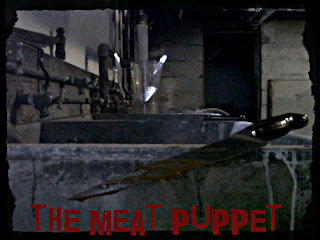 New project filming in New Jersey right now, check it out.  Always good to keep up on what's going on out there.  How about you?  Are you filming something?  Want to promote your project?  Let us know!

"THE MEAT PUPPET" (1. meat puppet; (noun) person(s) that have no will of their own; somebody that lets others control them. Another name for a human being, especially one who doesn't think for him/herself, has no soul and is therefore controlled by others).

"Currently filming in New Jersey is this year’s new bone chilling horror/thriller “The Meat Puppet”. From the mind of Award Winning Actor Keith Collins, along with Silver Phoenix Entertainment, Valenti Vision Films and the pen of NY Emmy Award Winning writer Joseph Pepitone and Billy Pepitone (“Stuck in the Middle”) comes a sadistic thrill fest, full of twists and turns, that is sure to give movie goers the fright of their lives.

A vain, successful playboy tortures and kills beautiful girls and uses them to make the perfect meal for his lavish dinner parties. Body parts, blood, torture, cannibalism and NO escape are a few ways to describe this clever new terrifying and psychologically damaging creep show.
“The Meat Puppet” tells the story of Andrew “Drew” Shelton who has it all – looks, money, women and an insatiable taste for human flesh. His vanity is only surpassed by his obsession with finding the perfect tasting meal and it has fueled his appetite for killing, preparing and cooking beautiful women. He throws lavish dinner parties and serves his guests his latest victim and one unlucky guest becomes the main course of his next get together. When a no-nonsense detective starts putting the pieces together, it leads to a game of cat and mouse that only increases the stakes. But is Drew the soul-less, cold-blooded killer that he appears to be? Or is he just the Meat Puppet for a more sadistic mind?