"Ink", the weekend box office and the week in horror... 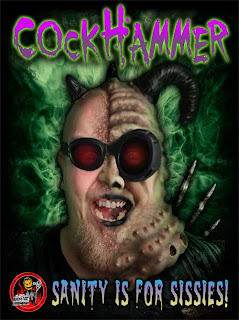 Before I even get into the box office round up and the new horror coming out on DVD this week, I need to mention a film that I just watched called "Ink". Has anyone else seen it? With all due respect to "Paranormal Activity", it's the indie film of the year, as far as I'm concerned. Go find this film. I've reached out to the guys who made it and I hope to be able to talk with them soon. Not only did they make one of the most intriguing films of the year on a meagre budget, the way they distributed it is revolutionary. Stay tuned on this. Like I said, I hope to discuss it with them and have something for you soon.

So, as for mainstream horror... Lionsgate's "Daybreakers" didn't actually do that bad over the weekend. It was the best new release of the week, even though it came in fourth overall... behind "Avatar", "Sherlock Holmes" and "Alvin and the Chipmunks: The Squeakquel". "Avatar" is just a beast... it's unstoppable and I'm predicting that it surpasses "Titanic" as the highest grossing film of all time. "Sherlock Holmes" is a bit of a surprise. I haven't given it much more than a passing thought, but I've talked to a lot of people who have seen it and some were even saying it's Oscar-worthy. Granted, without having seen it, I argued that. In any case, reviews on "Daybreakers" are good and it had a strong opening. "The Book of Eli" comes out this Friday and I don't have much of an opinion on that, either... we'll have to wait and see. As for the week in horror on DVD, it's fairly tame. As usual, you can click here and see all the trailers on our Youtube page and you can click on the titles to be taken to their Amazon page, where you can read more and/or buy the film.

So, without question, the biggest budget release of the week is Rob Zombie's "Halloween II

". If you liked the first one, you'll probably like this one, but... for me, these films are so far away from what Rob Zombie's good at. Not only that, I just don't like where he's going with Michael Myers. Truth is, he's humanizing him way too much. I've always liked the fact that Michael Myers was a relentless, faceless killer that was pure evil. You never heard him mutter a word, show a reaction, grunt, spit, whatever... he was just unstoppable evil. Zombie has him grunting, talking... we see parts of his face. He's just too human. I get that you're going for that 'brutal' and 'realistic' feel and, if that's the case, you shouldn't be fucking with a horror icon, make up a whole new franchise. Those are my thoughts, disagree with me, if you will... actually, I'd love to hear your thoughts on this.

", maybe micro-shock porn-horror? "Cockhammer" comes from writer/director Kevin Strange, who's the guy who brought you "Dead Shit", "Colonel Kill Motherfuckers" and "Stiff Jobs". There's a lot of people making films like these, but Strange is one of the best. Really, he's just doing one of those things that Hollywood won't do. There's lots of tits, ass, cock, obscenities, vomiting, poop, etc... and his films are extremely entertaining. Check out the trailer, it's not like they hold back or anything. There's definitely a market for films like these...

" came out in 2004 as an A&E Television movie and I actually remember watching it... and kinda liking it. It's about a series of interviews that are conducted with convicted serial killer Ted Bundy in hopes of gaining insight into the Green River Killer, who is terrorizing Seattle. It's like "Silence of the Lambs", but with real killers... played by actors. Cary Elwes actually does a bang-up job of portraying Ted Bundy.

Lastly, they're releasing DVD's of the original "House On Sorority Row