Box Office Wrap Up, Sundance and the Week In Horror DVD's 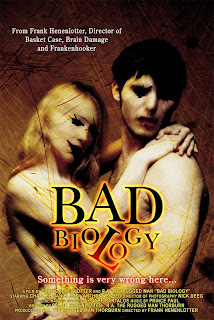 I don't know, it's tough to say anything new about the box office anymore. Once again, "Avatar" is number one overall, although "Legion" did come in second... Currently, Worldwide, "Avatar" has grossed $1,836,143,000. "Titanic", obviously, is the highest grossing film of all time... it's final Worldwide take? $1,842,900,000. So, "Avatar" should surpass it sometime this week and take the top spot. The real story here is foreign box office and if you're interested in how you write something that has that international appeal, "Avatar" is a shining sample. It's all about universal, simple to understand stories, action & adventure and special effects. It's a spectacle film - everyone wants to see a spectacle and it's the same here as it is in India, China or Russia. What's funny is, the Chinese government finally banned "Avatar" from most of its theaters last week because they thought it was limiting the exposure Chinese movies. Crazy... Anyhow, on the other side of the film spectrum, both Sundance and Slamdance got underway this last weekend. There's various good looking horror films that are screening at Sundance this year, including: "Splice", which I'm extremely excited about and anxious to see; "7 Days"; "The Violent Kind", from the infamous Butcher Brothers; "Tucker & Dale vs. Evil", which looks awesome - please, find the trailer on youtube; the much talked about, "Buried", staring Ryan Reynolds and, finally, "Frozen", which looks crazy. I won't get into Slamdance, maybe I'll cover off everything that's playing there later this week, I don't know. However, what I would like to get to is the week in horror DVD releases, as it's the best week we've had in quite some time. As usual, click here to go to our Youtube page, where you can see all the trailers AND you can click on the titles to go to their Amazon pages, where you can read more about the films and/or buy them.

" was directed by Bruce McDonald and was adapted by Tony Burgess, from his own novel called "Pontypool Changes Everything". The entire film takes place in a radio station, as the morning team takes reports of an extreme, bloody riot from their field reporter. As the story unfolds, it becomes obvious that it's not just a regular riot, it's a zombie outbreak. Well, the filmmakers say they aren't zombies, it's a various, but... whatever. The cool thing about the film is, they simultaneously produced the story both as this film and as a radio play. Pretty cool, I'd love to check out the radio play.

Alright, Frank Henenlotter, I love you, buddy. I'm a huge "Basket Case" fan, loved "Brain Damage" and I even respect "Frankenhooker". However, I think you missed the boat on "Bad Biology

". I could be wrong, please argue with me on this one, but... I just found it to be pure sexploitation. Don't get me wrong, sexploitation is overly evident in all Henenlotter films and I'm a fan, but... chasing a detached steroid-riddled penis around? Believe it or not, the film actually won the Phantasmagoria award from the Philadelphia Film Festival, where it premiered in 2008. He's a legend, check it out for yourself and let me know what you think.

". Now, let's not forget that there was also "Dollman vs Demonic Toys", "Puppet Master vs Demonic Toys" and "Demonic Toys: Personal Demons", but this is the OFFICIAL sequel. Full Moon and Charles Band... love it.

From the mind of Walter Koenig, comes "InAlienable

". Yes, Walter Koenig, Star Trek's Chekov. Believe it or not, he actually did do some writing over the years, mostly for the shows that he acted in. I've already talked about this particular film, so I don't want to rehash the fact that it stars piles of ex-Star Trek actors... but what I do want to comment on is, is it really about a guy who gives birth to an alien after it grows inside his stomach as a parasite, then he tries to adopt it back in a court case against the government? REALLY? Check out the trailer... I swear that's what the allude to. Either way, I'll be watching this one very soon.

Now, there's a few indie horror's coming out, as well... and I'll quickly touch on them because I don't know much about them, nor do I have time to research them. "Madness

" is about a group of cheerleaders that hook up with a band of ruthless killers, nice mix. Cheerleaders and crazy killers, I like the concept. "Dead at the Box Office

" is a zombedy about a zombies that trap a group of innocent bickering victims in a movie theater and they're more dangerous to each other than the zombies are. I do like the setting and premise, so I'll be sure to check this one out, too. "The Double Born

" actually has some budget behind it and it won a bunch of festival awards. It's tauted as "a new thriller from the creative team that brought you the Hellraiser and Wishmaster series". Also, it's based on a Bram Stoker novel, I guess. Last up is "8 Million Dollars

", which is a low-budget horror about 8 people competing for $8Million. The set up is, there's $8Million and 8 people and you're all spending the night in this old mansion. Split the money or one person can walk out with all of it, here's some weapons... have a nice night. Concept seems a bit used to me and the story would really require a good catalyst to get people killing each other, as I'd just say, "I'll take a million, fight amongst yourselves, I'll be upstairs taking a nap. Having said that, I haven't see it, so I don't know... maybe they do a good job of setting it up.

That's it for today, we've got a good interview ready for Wednesday, so look forward to that!
Posted by Dead Harvey at 9:20 AM