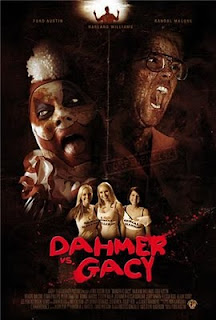 Being a member of the press does have it's privileges, including an invite from filmmaker Ford Austin to the pre-screening party for "Dahmer vs Gacy". This film looks to be a crazy ride and features an outstanding cast. Randal Malone looks so f'ing psychotic in that clown outfit and makeup, this may just be the role he was born to play - even if that means I may have nightmares after the screening. I encourage everyone to check it out and support independent cinema! And if you go on Friday, word through the grapevine is you may brush elbows with many members of the stellar cast. I'm certainly hoping to score some interviews, which should be pretty entertaining because there's more than a slight chance that booze will be involved. I hope to see you all there!
Midnight Screening Series: Jan. 15th & 16th at Laemmle Sunset 5 in Hollywood!

DAHMER vs GACY
"Just shut up & go with it!

Film Synopsis: A secret government lab has been trying to create the ultimate killer using the DNA of infamous killers Jeffrey Dahmer and John Wayne Gacy, but there's one
big problem: They've escaped! Bloody mayhem stretches across the United States as they go on the ultimate killing spree. Trying to stop the maniacal madness is Ringo, a hick warrior being trained by God, using only a shotgun and a bottle of whiskey. In his road trip to hell, he must first fight off his own demons, not to mention an army of Japanese ninjas! It all leads up to the ULTIMATE SHOWDOWN!