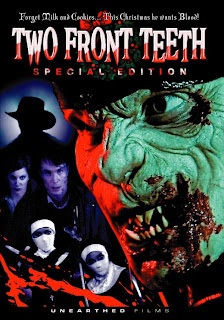 At first, I was thinking it was a mediocre week in horror, but after weeding out the rereleases and multi-pack's, there's a good group of films coming out. And it's a good thing, too. Unless you're living in L.A., the weather's starting to go to shit and you're going to need stuff to watch while you sit inside and drink your face off. As usual, if you want to help us out and you were planning on buying one or some of these films, just click on the title and buy it through Amazon, through us. Also, go over to our Youtube page and check out all the trailers.

So, to get us into the Christmas season... co-written, directed and produced by Jamie Nash, "Two Front Teeth

" is my pick of the week. I haven't seen it, but I was just reading about it in Rue Morgue while I was in the can and was thinking about how I need to get my hands on it, then I find out that it's actually coming out this week. Nash was the guy who wrote "Altered", directed by "Blair Witch" Alum Eduardo Sanchez, which came out a year or so ago... I'm just going to have to quote Nash about his film because I can't make this shit up or do it any better. "Two front Teeth" takes place "the night before Christmas and Gabe Snow, a tabloid writer haunted by the Ghosts of Christmas past, is investigating a Yule Tide conspiracy. Gabe knows that Flight 1225 was brought down one foggy Christmas Eve, by a flying creature with a "glowing nose". Now, a blood-sucking Vampire - Santa Claus - has put Gabe on his list and unleashed the demonic fury of the North Pole. An army of zombie elves, who have no interest in Toys or pointy hats or dentistry, are about to turn Gabe's white Christmas blood red. Will Gabe find the true meaning of Christmas? Can he stake a heart that's two sizes too small? What will he find under his tree?" Awesome... I love it.

My second pick of the week has to be "Conjurer

", mainly because I know the film well and we've interviewed Clint Hutchison, the writer/director. "Conjurer" has gone on to win a couple of awards, the Action on Film Award for Best Horror Film and the Festival Prize for Best Feature Film at the Dixie Film Festival. It's about a photographer and his wife, who move out to the country to start a new life, but begin to suspect that the ramshackle cabin on their property is haunted by the malevolent spirit of a long-dead witch. It's a great film, really well done. You can check out our interview with Hutchison here.

", which was originally called "Lost Signal", is the directorial debut from Brian McNamara, who's actually a Golden Globe nominated actor for his portrayal of Dean Karny in the TV Movie "Billionaire Boys Club". He's also been in Seinfeld, The O.C., Star Trek: Voyager and a bunch of other stuff, if you're interested... you'd probably recognize him. Anyhow, the film is written by Robert Egan and Graham Silver and it's sort of like "The Shining", where a couple finds themselves battling the elements of winter, as well as inner demons. It's apparently based on true events.

", directed by Rick Bitzelberger, comes from Lions Gate and it's based on the true story of Ed Kemper, a serial killer who murdered ten co-eds in Santa Cruz, CA during the late sixties and early seventies. Looking through Bitzelberger's filmography, he's taken quite the path to get to this. His earliest credit is for acting in the cult classic, "Beware: Children at Play", which was awesome. After that, it looks like he started working for Penthouse or something, writing and producing films like "Erotic Confessions" and "Penthouse: The All-Pet Workout". Then, there's a a short film he directed called "Say the Secret Word", a few legitimate Christmas TV shows... and then this. Goes to show, there's no ONE way to make it to directing features.
Posted by Dead Harvey at 9:00 AM