New Horror out on DVD this week, including the long awaited return of Robert Hiltzik to the "Sleepaway Camp" franchise 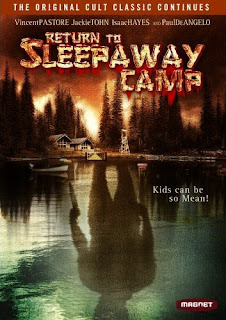 Ahh... the week AFTER Halloween. Just a little slower, however there's some great titles out this week, including the long awaited return of Robert Hiltzik to the "Sleepaway Camp" franchise. As usual, if you're looking to buy the films and want to help us out a bit, click on the titles and buy them from Amazon, through us. Also, you can go to our Youtube page and check out all the trailers. However, I can't get to that right away, but should get to it in a few hours....

Most of you should remember the 1983 cult hit, "Sleepaway Camp", which was written and directed by Robert Hiltzik. The fourth installment in the series comes out this week, called "Return to Sleepaway Camp

". The cool thing about this installment is that it's, once again, written and directed by Hiltzik, even though it was done a few years back. Hiltzik let other people write and direct the second and third installments, while he went to law school and then became a partner in a NYC law firm. The funny thing is that he only found out that "Sleepaway Camp" had a big cult following in 2000, when someone contacted him to do a commentary on the Anchor Bay release. So, I guess he said, "F it", and came back to do this one. He also has another one in the works called "Sleepaway Camp Reunion", which is currently in production.

I feel like I should know about "Moscow Zero

", but I don't. I believe it's a Spanish film, as it's done by Spanish director, Maria Lidon, and it's written by a Spanish writer, Adela Ibanez, AND it was filmed in Spain. However, it stars Vincent Gallo, Val Kilmer and Sly Stallone's kid, Sage Stallone, which is why I can't beleive I don't know much more about it. Anyhow, reviews are mixed and it's about an eerie multilevel system of caves and catacombs that exist under Moscow and are filled with zombies and evil demons.

", which was originally called "Death Valley", is an indie-horror monster flick from Sean Dillon, released by Brain Damage. It's about five young people on their way to a summer festival who run into a mysterious man in a remote part of the desert... and after they unleash the man's deadly secret, they must decide who they can trust as they struggle to escape or just survive. The film is done by a collective of artists known as Biscuits & Gravy and it's their first feature length film. Judging from the trailer, it looks like it's really well put together. I'm going to have to check this one out...

" is written and directed by Serge Rodnunsky, who's directed a whole bunch of stuff. It won a few awards, including the commendation award at Festival of Fantastic Film in the UK and the Gold Award for Outstanding Achievement in Fantasy/Horror at WorldFest Houston. After that, it was picked up and released by Lions Gate. It's being called a 'classic retro horror thriller' and has a pretty wicked plot - Sam, an aspiring writer, takes a job as a clerk in an L.A. inner city grocery market owned by the sinister Dr. Munoz, a former scientist who claims to have a rare skin condition that forces him to live in sub-freezing temperatures. However, Dr. Munoz actually died some time ago, but has kept himself alive through occult measures and the flesh that he harvests from kidnapped victims.

There's a bunch of Spanish horror films coming out this week, too. My knowledge of Spanish is limited, so here's what I can find out about them... "13 Miedos: Primera Temporada

", appears to be a compilation of some sort. I can only guess that because it's 287 minutes long. I know nothing more than that. "El Nominado

" is about 'the most extreme reality show to date' where you and 9 strangers are dropped off by a helicopter in a mountain range and have to survive in a bunker 40 meters below ground. "La Brecha

" is about a broken clock that can predict the time in which people will die.

Lastly, I have to mention "Autopsy: A Love Story

", which is actually a few years old now, but I wanted to mention it because I love the title. It's and low-budget indie horror, written and directed by Guy Crawford and it's about a morgue worker who falls in love with one of his female stiffs. It's low budget, but if there's one reason to check it out, check it out because Joe Estevez is in it... Bless that guy.
Posted by Dead Harvey at 9:00 AM