New Horror out on DVD this week, including The Zombie Diaries 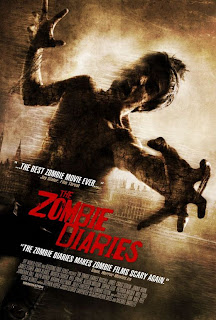 It's a pretty good week for horror... well, indie horror, anyhow. There's no big-budget horror films coming out this week. In fact, there's no big-budget horror films coming out for a while, which is cool with me. So, as usual, if you want to buy the films and want to help us out, please click on the titles and buy the films off Amazon, through us. Also, be sure to head over to our Youtube page, where you can find all the trailers.

Here's one of those sad truths... At this point, this side of the pond, very few indie horror fans will have heard of "The Zombie Diaries

" and when they do find out about it, most will just assume that it's a rip off of "Diary of the Dead". Well, Dead Harvey's here to tell you it's not. True, I have no idea of when Romero actually came up with his idea, but Kevin Gates and first-time filmmaker Michael Bartlett actually released "The Zombie Diaries" first AND completed it first. They come up with the idea in the Fall of '04 and it had its theatrical debut on October 29, 2006. The film, obviously, has a very similar premise to "Diary of the Dead" and it was shot hand-held on DV. Now, I don't want to start a fight or anything, but I will say that a lot of people think these guys did a better job than Romero did... but I'm not going to pick sides. So, you check it out for yourself and be the judge.

A few weeks ago, I was commenting on how it's great to see Ken Foree making it into a bunch of indie horror films, now it seems like a week doesn't go by without seeing Ken Foree in some film. This week, it's "Splatter Disco

", which gets my Best Title of the Week award. It's directed by Richard Griffin, who co-directed "Necroville" with Billy Garberina, whom we posted an interview with last week. Griffin has written, directed and edited a lot of quality indie horror, including "Creature from the Hillbilly Lagoon", "Pretty Dead Things" and "Raving Maniacs". The plot for "Splatter Disco" revolves around a fetish nightclub that's under attack by a bunch of narrow minded moralizers. On top of that, now there's a psychotic killer targeting the club and killing the patrons. So, it's up to a pair of unlikey lovers, a drug-loving hippie attorney and the club's closeted bouncer to uncover the truth and save the club. Indie horror at it's best! Go check it out...

If you've been laying awake at night, anxiously waiting for the next installment into the 'gay horror' scene, you can finally get a good night sleep tonight. "The Gay Bed and Breakfast of Terror

", which has apparantly become a bit of a fan favorite at gay film festivals, is finally being released on DVD this week. It's about a gay-friendly bed and breakfast, where a God-fearing mother/daughter team lure gays to either convert or kill them... It's more comedy than horror, with characters like the bastard child of a hundred Republican delegates, the lesbian nun who likes to seduce young women during bingo and the drag queen who hooks up with a butch lesbian... and, that's not to mention that everone's eating human mince meat muffins all the while. What can I say? If gay horror's your thing, you'll need to check it out.

", which was originally called "Credo" in it's native UK, is the feature length directorial debut from director Toni Harman and writer Alex Wakeford. It's an indie horror that's set in London, England and it begins with a group of theological students who decide to test their faith by proving the existence of Hell. Then, years after they're all found dead, another group of students show up. However, these guys aren't there to prove the existence of Hell, they're there because they got evicted from their student digs... then they discover that they're not alone.

" was written, directed, produced and edited by Vatche Arabian and it won him the Commendation Award at Festival of Fantastic Film in the UK and the Jury Prize for Best Experimental Film at the Honolulu International Festival. The film is a documentary where, for the first time in 75 years, a young actor (Conor Timmis) brings back to life two of Universal's iconic Karloff monsters, "The Mummy" and "Frankenstein" for an elaborate screen test and tribute to the legendary Boris Karloff. If you're into the old-school horror and horror history, it could be a fun film to check out.

" was originally released in its native Mexico as "KM 31: Kilometro 31". So, for its North American DVD release, they dropped the "Kilometro 31" because there's no way that we're going to be able to figure out what that means. Written and directed by Rigoberto Castaneda, it won a few awards, including: Best Visual Effects, Best Costume Design and Best Sound at the Ariel Awards in Mexico. It's about a haunted stretch of highway, by the Km 31 marker, where supernatural accidents are caused by the ghost of a mother that lost her boy there years before.

I don't know much about it, but I figured I'd mention this "Indie Sinema (7-Pack)

" that's coming out, as well. It's from Fat Cat DVD and it's a 6-disc set containing 7 films, including: Kingdom of the Vampire (1991 & 2007 versions), Genuine Nerd, Polymorph, Bent Volume Two, Eddie Presley and Townies.

". The 2-disc edition contains over an hour of new, in depth interviews and two full-length commentary tracks, including the infamous "Inebriated" commentary track, never-before-seen deleted scenes, production stills and more.
Posted by Dead Harvey at 9:15 AM