Interview with Xu Razer, co-director and co-star of HOUSE OF MIRRORS. 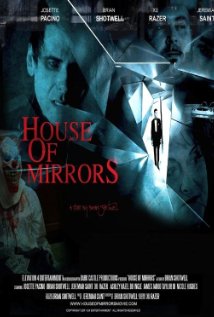 Here's an interview with Xu Razer, the co-director and co-star of the upcoming indie horror, "House of Mirrors".  If you'd like more information on the film, you can check out it's IMDB page here.  Otherwise, Xu offers up a great interview!

HOUSE OF MIRRORS is about a rich music executive who wakes up amnesiac the morning after a party and receives a phone call that he murdered someone the night before.  He has no memory of the event and is not sure if he did it.  The caller gives him only 48 hours to comply with his bizarre riddles before giving the police info about the murder.

1    If you don’t mind us asking, what was the budget for the film and how did you secure financing?

All we can say about the budget at this time is that it was less than Superman Returns and 2012.

1    As of right now, what are your goals for the film and what kinds of things are you doing to make sure you reach your goals?

Our goals for the film is that it reach as wide an audience as possible- we would like everyone who likes mind bending horror/thriller to get a chance to enjoy it!

1    What about film festivals?  Are you going to enter your film?  If you have, how did it do?  Tell us about your feelings around the indie film fest circuit.

We have submitted our film to a few festivals.  One festival told us he would waive the fee on Withoutabox if we agreed to world premier it at his fest.  We also have a distributor of one of our previous films who requested a copy for a possible festival screening in April.

1    Talk about distribution.  Have you secured distribution?  If so, how did you go about doing that?  If not, what’s your plan?

We’ve sent out some copies to distributors.  Bloody Disgusting requested a copy after we sent a press release to their site, and told me by e-mail that they partner with Vivendi-Universal to distribute successful horror movies from the film fest circuit.  We haven’t gotten an offer from them, but it was flattering that they requested a copy nonetheless.

1    Where can people find out more about the film and/or get their hands on a copy?

Copies will be available in the next few months when we sign a contract with a distributor.

1    Talk about the production.  How did it go?  Tell us one good or funny story that demonstrates the trials and tribulations of being an indie filmmaker.

One of the cast members got extremely drunk. You’ll see who when you watch the movie.  I had to take the bottle out of his hand and pour it down the sink.  He was a good sport about it.

1    What about you?  Tell us a bit about yourself and how you got into indie horror.

we like interesting off-beat stories.  Some big studio horror movie are so formulaic they are painful to watch.  I want to not be able to guess what’s coming next when I watch a movie.

1    Talk about the indie horror scene.  Where do you think it is now and where do you see it going?

We see it exploding onto the mainstream with movies like Blair Witch and Paranormal activity.  People are getting tired of the same old stories and want to be shocked with novelty.  Studios are trying to figure out how to make their movie look grainy and bounce the camera so it looks indie.

1    Do you have any more projects in the works?  What’s next for you?

Yep, we are shooting next weekend!
Posted by Dead Harvey at 9:26 AM

And festival premier at the Indie Horror Film Festival http://indiehorrorfest.com/page/2/