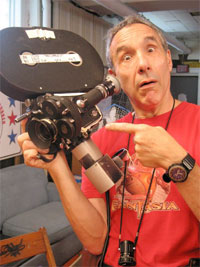 Troma's Lloyd Kaufman is, if anything, a huge proponent of independent film.  All of his films are, in one way or the other, independent and he's done more for the indie film scene than anyone I can think of off the top of my head.  He's launched an indie film festival, he makes, produces and distributes indie film and he's always looking out for the community.  He also knows how important the internet is to independent film's success.

The internet is our only ability to have a voice.  It's our primary source for marketing, distribution and networking.  It's the only level playing field that we have with the studios.  So, when you hear debates on net neutrality and how it's about piracy, think again.

You should have an opinion on it, so do read as much as you can.  However, do yourself a favor and check out this article written by Uncle Lloyd.  It might make you realize how important this debate actually is.
Posted by Dead Harvey at 9:52 AM

Your uncle knows how to do it right, there's no doubt about it!

Good day! I know this is kinda off topic but I was wondering if you knew
where I could find a captcha plugin for my comment form?
I'm using the same blog platform as yours and I'm having trouble finding one?
Thanks a lot!