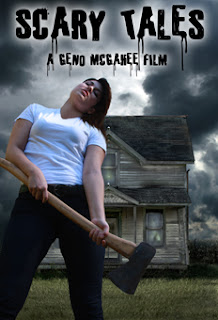 We received this press release from Geno McGahee about his latest film, a horror anthology called "Scary Tales".  I figured that I would just share the whole thing, so you can check out how he put it all together and, of course, read all about the film.  I would like to mention that if any of you other filmmakers have press releases or want to talk about your upcoming projects, please let us know!

On behalf of X Posse Productions, we are excited to announce that the Official Facebook page for their upcoming horror thriller SCARY TALES.

SCARY TALES is a unique horror anthology featuring five tales. When four friends reunite at a remote cabin, they share some campfire stories, but the line between fantasy and reality soon gets blurred and the unexplainable begins to occur.  There is something for every horror fan.  SCARY TALES features zombies, werewolves, demons, and the devil himself.  The twists and surprises that were seen in FAMILY SECRET, the last X Posse Production, are also in good supply in this new anthology.