News Out of CES that you should care about... 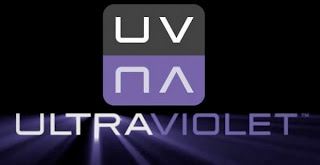 Do any of you guys give a shit about CES?  If you don't, you really should...  and if you don't know what it is, it's the Consumer Electronics Show and it was in Las Vegas last week. Lots of celebrities hit it up and all the major technology and media companies make big announcements there.  For example, Tom Hanks was there announcing that he's partnered with Yahoo for his next creative venture, "Electric City".  He even went on to say that while feature films are "supposedly the top of the pyramid", the ecosystem is changing.  Since then, Hulu has announced that it's developing a series for online distribution, Netflix is already in the game with it's "Arrested Development" reboot and other big time online projects are popping up.  Online, as a distribution network, is just heating up... and I'm going to do a post on that soon.  Until then, there was some other news out of CES that I found interesting and it has to do with Ultra Violet and Blu-ray.

Everyone knows that the disc format is dying, right?  It's VHS, Beta and 8 tracks all over again, isn't it?  Well, apparently, Blu-ray boosted Hollywood's home video business in 2011, growing 20% and topping $2billion in sales.  That's pretty big news, considering that everyone keeps saying that the home entertainment business is in the dumper.  Sure, overall spending was down, but only slightly... 2%.  That's a far cry from what the studios would have you believe.  So, is home entertainment dead or is it just changing? This is interesting for us indie filmmakers because the theatrical market isn't an option for us... Online isn't going to be a viable option for at least a few years and with the DVD and home entertainment market dying, where are we supposed to turn?  Here's the thing...  I'd argue that a lot of Americans still put a disc into a player to watch movies and aren't going to stop soon... way more than you think, and that's good news for us.  Variety did an article on all the numbers, you can find that here.

The other thing that I found interesting, which they talked a lot about at CES, is Ultra Violet.  Have you heard of this?  Basically, there's a consortium of 70 businesses, called the Digital Entertainment Content Ecosystem, that back and are connected to Ultra Violet.  What is it?  Basically, the idea is, content (films, shows, whatever) is stored in the cloud and once you buy that piece of content, you get access to it on any device that you'd want... forever.  Read this article on CNET to read more about how it works.  What I like about this... and any online distribution format, is that, technically, if it catches on, the barriers for indie filmmakers to distribute their content should lessen.  Imagine being able to upload your film, make up a profile page and then it's up to you to market it.  You just collect on all the people who access it.  Think about what it would mean for the indie film festival market, too...  the future could be very bright.

We've got a few interviews with filmmakers to post this week, so stay tuned for that!

Have been writing quite a beauty,
Very like the style,
Sites:Ucuz Otel Fiyatları
erken Rezervasyon
Tatil Yerleri
Kuşadası Otelleri