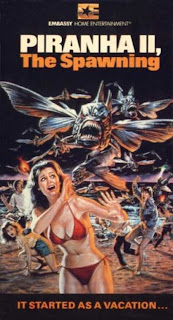 Okay, things are slowly getting back to normal around here. Well, the new normal, anyhow. We here at Dead Harvey are working on a few projects and we're going to be spending some more time on those. Of course, we're going to continue to post new things on the site, it may just be at different times and on different things. At the end of the day, if you're in to indie and micro-cinema horror, as a filmmaker or fan, we'll keep you happy. Anyhow, there's really nothing of note, horror-wise, going on at the box office, so I'm just going to get right to the new horror coming out on DVD.

Anyone worth their weight in indie horror knowledge knows that "Piranha II: The Spawning" was the directorial debut of James Cameron. It came out in 1981 and it's the sequel to the low-budget 1978 film, "Piranha". The story goes that James Cameron was originally hired to be the special effects guy, but ended re-writing the script and taking the helm... however, the executive producer, Ovidio Assonitis, got involved and Cameron was only allowed to shoot the film, he wasn't allowed to cut it... legend has it that Cameron broke into the editing room in Rome and cut his own version, but ended up getting caught. In any case, the film was a bit of a bust and Cameron was later allowed to cut his own version of the film, but it's rare. It's probably easy to get now, but I've never seen it. ANYHOW, I'm fairly certain that this story is one of the only reasons anyone knows about the "Piranha" franchise and it's probably why it was remade and available this week on DVD as "Piranha 3D

". This version is actually directed by French horror director Alex Aja, who is the guy behind the new wave French Horror classic, "Haute Tension". He also did the remake of "The Hills Have Eyes" and a few other big budget horror films. This is one that I didn't check out in the theaters, but will definitely be checking out on DVD.

Most indie horror fans are aware of the 2004 film "Chainsaw Sally", where April Monique Burril plays the title role of Chainsaw Sally, a girl that witnessed the murder of her parents and grows up to become a serial killer that gets her inspiration for killing from horror films. What I didn't know about... and haven't seen... is "The Chainsaw Sally Show, Season 1

", which is now available on DVD. I really dug the film and I'm going to have to check this out. Apparently it's filled with horror references, cameos, gore, hot chicks and hapless victims. What more do you want? All that and I believe it's distributed by Troma... probably through its Troma TV, which I have no idea of how to subscribe to.

", but only because it kinda reminds me of the cover art for Slayer's "South of Heaven" for some reason. It's released by Tempe Video and it's directed by Mark Plonia... and it's about a college party gone bad, where a mistreated student exacts his revenge on those who wronged him. His uses the effigy of a living scarecrow, a Frankenstein-like creation, to carry out his plans. Definitely piques my interest...

Here's one for the horndogs... "Chinese Kamasutra

" is about an American scholar of Chinese lore that takes a job at a Chinese library and stumbles upon a volume of the Kamasutra... and unleashes her sexual fantasies. There's some sort of connection between the book and some haunted house and then she somehow falls into the clutches of the Kamasutra cult, who probably do terrible sexual things to her.
Posted by Dead Harvey at 7:10 PM

The Chainsaw Sally Show is indeed distributed by Troma and is definitely worth a watch- goriest sitcom ever!
https://buy.tromamovies.com/
BUY TROMA!