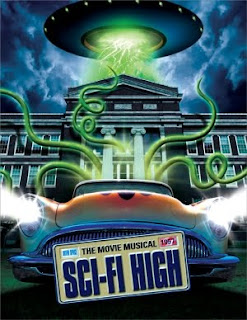 Wow, it's been a good two or three weeks since I've posted anything. Sorry... lots of family in town and Christmas was hectic. Truth be told, things are still hectic. Hopefully I can get back in a groove soon and be posting on a regular basis again. Anyhow, let's get right to the new horror DVD's that came out this week.

". It's a Syfy original that premiered back in 2009 during their 31 nights of Halloween. It's directed by Griff Furst, who's the son of none-other-than Flounder (from "Animal House") himself, Stephen Furst, and stars Jeremy London from "Party of Five" as a newly transformed werewolf that's working with vampire hunters to stop a vampire cult that has plans to resurrect Lilith, the mother of all vampires. So, basically, your typical Syfy original.

I doubt that "Let Me Die Quietly

" will be a true horror, but it's garnered some awards and is critically acclaimed. It comes from indie label, Breaking Glass Pictures, and is directed by Mitchell Reichler and Brian Finn. The film follows a broken-down alcoholic who's haunted by psychic visions of murder victims. It won best suspense feature at the Indie Gathering Film Festival and Best Suspense Thriller at the New York Film and Video Festival.

" comes from Brain Damage Films and Midnight Releasing... and it's a musical. I'm not sure what the budget was, but it looks like they sure did a good job with whatever it was. I don't think it's one for the gore hounds... at all, but it looks pretty damned good.

We just interviewed the guys behind "The Shadows

" and we definitely recommend checking it out. Here's a link to the interview that we did with them... or you can just scroll down. It's the last post we did.

Believe it or not, the reviews and comments on "Alien Vengeance II: Rogue Element

" are good... and I kinda like the idea behind the plot. A group of friends get together after a decade apart when they find out that one of them is actually an alien... and they cut off his head.

It's shot in black and white, it's low-budget, it looks hilarious and awesome... and it's got a great title - "Hamlet the Vampire Slayer