Tales From An Aspiring Screenwriter 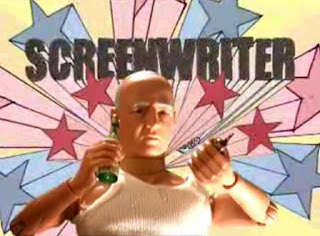 It was about a year ago, maybe just over a year ago, when I made a public announcement that I was going to make a concerted effort to write one quality, sellable (in my mind) screenplay per year. I came to that conclusion after making a few short films, writing on the blog, working with other filmmakers and trying to figure out just how I was going to attack this whole "career in indie horror" thing. Truth be told, ever since film school, I've enjoyed the screenwriting process the most. That's where you get to puke all your ideas out, that's where you can be the most creative and that's where it all starts. That's where iconic characters and places like Camp Crystal Lake and Elm Street are born. That's the artsy, romantic side. The other side is, it doesn't cost a fucking thing, but time, to write a screenplay. Very economical. Anyhow, if screenwriting is to be my key... how do I open the door? The way I look at it, I've got three options.

The easiest, although costliest, is entering screenwriting contests. I used to be extremely weary of them, but the credible ones do offer a great service to unrepresented, up-and-coming and aspiring screenwriters. I've talked to a few contest winners and some of the people who run the contests and festivals and none of them have anything but good things to say about the process. Some of the contests give coverage and notes, which is invaluable, and I'll get a good idea of how I'd fare against other scripts in similar sub-genres. To navigate this properly, I'm going to have to research the different contests and festivals, then figure out which ones to enter. First off, I'll look at the contest itself. Is it horror specific or does it have a horror section? There's no way that my blood-soaked, serial killer homage to "Taxi Driver" is going to compete against "Gone With The Wind 2" in a generic screenwriting contest... Next thing to consider is, what kind of exposure will it get? No offense, but if I'm choosing between entering Shriekfest out of L.A. or Utah Bob's Horror Screenplay Contest, I'm picking Shriekfest. Granted, if Bob's is free, I might as well enter it, as well. So, what's my goal in this whole option? Well, really, it ain't about the prizes, it's about the exposure. If I can win one of these, chances are I'll have managers or agents calling me... and, not only that, I may get an award to hang my hat on, which may open some doors when dealing with my next option.

If I bomb at the contests or nothing comes out if it, the next logical step would be to attempt to get an agent or manager on my own. How's that going to happen? Two ways, I figure. One, the traditional way... I write up a query letter and I spam it out to every agent in town. I could also use one of those online deals, where you write the query letter and they spam it out to every agent in town. Basically, these guys approach all of the agencies and production companies and get them to say what they're interested in. Then, when you say, I've got a horror film and it's about X, Y and Z, the email goes out to all those who are interested in that sub-genre. Then, they'll request your query letter... then, they'll request a script. It's a good idea and something that I may try. The other way is the blood, sweat and tears way. I carefully read the trades to watch for which agents are representing other screenwriters who are writing similar stuff, then I approach them. The good thing about doing it this way is that I can cater my email or query letter directly to them. The bad thing is, the result, after a lot of hard work, may be the same. There is another option and it's something that I'm definitely going to explore... and that's getting in touch with anyone I know that has an agent and asking them if they could pass my stuff on to them. It's worth a try and is, generally, an easy in... if the guy you're asking likes you.

So, last option... I tank at the contests and no agent wants me. What's next? I guess the last attempt would be to approach independent production companies. Really, I don't think this is that much tougher than writing query letters to agents and managers. I mean, I'm not talking about approaching Warner Bros or Universal... I'm talking about approaching the small, private ones. Almost every actor in town has their own production company set up, I'd approach them. All it would take is a bit of research to find an actor or director that has done similar projects, or is interested in similar projects, then finding out if they have their own little production company. If they do, it won't take that much googling to figure out the address or a contact. Then, I just write up a query letter that's catered right to them and send it off. Then, sit back and grow old waiting for a response.

So, that's where I'm at right now. I'm going to finish up the last tweaks to the script and then I'm going to come up with my game plan. What do you think? Am I missing anything? Do you have any other advice for myself or anyone else who's in the same shoes as me? Let me know... please. In any case, I'll be sure to keep you posted on any news and how it all turns out.
Posted by Dead Harvey at 9:05 AM