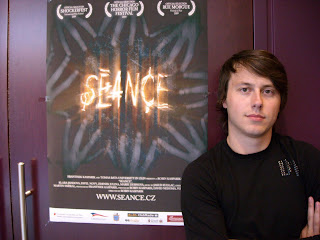 Okay, this came across my inbox and I definitely wanted to share.

I received an email from Robin Kasparik and he was hoping that I would check out his short film, "Seance", and give it a bit of a mention on the site. Well, I'm going to do that and more. The film is fantastic... it's shot well, it's well acted, it's very creepy and it works on a lot of levels. Plain and simple, it's top notch work. Lucky for you, he's uploaded the award winning short to Vimeo and I have it embedded below.

To be honest, I would've loved to do an interview with him, but he's Czech and I thought there would be a bit of a language barrier. And I mean no offense to the Czech people... in fact, I'm of Czech decent myself. Anyhow, I watched the film and he had attached a lot of information, I got quite excited about it and... I wanted to share sooner than later. Why? Because if you're looking into making a short film for the festivals, this film is what you should aspire to. "Seance" screened at more than 20 fests, including Screamfest, Rue Morgue Festival of Fear, NYC Horror Film Fest and won Best Short Film at the Dark Carnival Film Fest and the South African Horrorfest. Not only that, it's been seen by numerous master of horror, including Tony Randel, William Malone and Jack Ketchum, and they've all given it great reviews.

So, what about Kasparik? Well, he's 24 years old and currently attending the Film Director's course at the Tomas Bata University in the Czech Republic. Because of that, I'm assuming that he had the resources to give the film the rich look and feel that he did. Lord knows that I would murder innocent people to have the resources I had when I was back in film school, but I digress... Kasparik is hoping to continue working in the horror field and is now preparing his next short film, "I Am the Doorway", which is an adaptation of the Stephen King's short story.

I, for one, am very anxious to see what Kasparik comes up with next! The film is embedded below and for more information, you can go to Seance.cz

Seance from Robin Kasparik on Vimeo.

This particular type of call can really be very annoying since those who make prank calls are really insensitive about other people. [url=http://www.mr-reversephonelookup.com/]reverse phone lookup[/url] reverse phone lookup Many corporations have congregated countless landline accounts into Internet-based directories which can be attained by anyone who has online linkage. http://www.mr-reversephonelookup.com/