Twilight At The Box Office, A Decent Week In New Horror On DVD 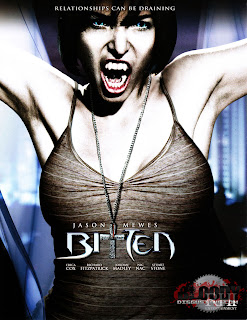 As expected, "The Twilight Saga: Eclipse" kicked some serious ass over the weekend. It actually didn't beat the last one, but it did pretty f'ing good - five days, $161Million. That gives it the 7th highest grossing five day start ever - but all of that is not terribly surprising. What WAS surprising was that "The Last Airbender" pulled in over $40Million dollars over the weekend, the third highest grossing opening for Shyamlan, behind the stinker "Signs" and the God-awful "The Village". What I didn't know is that "The Last Airbender" is an adaptation of an animated series called "Avatar: The Last Airbender", which had a fairly big, built in audience. As for the holdovers, "Toy Story 3", "Grown Ups" and "Knight & Day" all took fairly big dives, but all to be expected. Now, we're on the countdown to "Predators", from Robert Rodriguez, which opens this Friday... and I'm looking forward to it. Anyhow, on to the home entertainment market, where we'll look at the new and notable horror that's coming out on DVD this week. As usual, you can head over to our Youtube Page to see the trailers and you can click on the titles to go to the film's Amazon page, where you can read more about it and/or buy it.

I'm assuming that the bulk of the movie going public thinks that Jason Mewes just sobers up enough to be in a Kevin Smith film ever now and then. However, fans of low-budget horror know that he's a fairly busy dude. "Bitten

" comes from writer/director Adam Ahlbrandt and it's about a couple that lose their son to Sudden Infant Death Syndrome. It causes a rift between them, she has an affair and then the couple moves to a rural neighborhood, looking for a fresh start. Once there, strange things happen and long kept secrets try and dig their way out...

" comes from writer/director Miles Hanon and it's a story of spiritual manipulation. Sam, a lonely gunsmith, hooks up with his estranged sister-in-law and gets involved with a wicked spirit named Rallo. Production value looks great, but when you're dealing with demonic possession and spiritual manipulations, you better have some damn good actors... tough to pull off effectively. Will be interesting to see.

" is about a group of college kids that get trapped in a macabre underworld where body parts are extracted from victims for sale to the highest bidder. Trailer looks great and I love the premise. The black market for organs and body parts is pretty damn scary, only because you know it exists...

Why do I love Asian horror films? Because they just take everything to a whole other level. "God of Vampires

" is about a professional killer, Frank Ng, who's contracted to murder a Chinese crime lord... who happens to be a Chinese vampire. Undead kung-fu and lots of blood and guts follow. Awesome...
Posted by Dead Harvey at 9:46 AM