So, you want to be a Hollywood director? 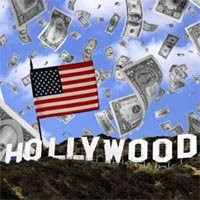 I remember when I was in film school, there was a certain Hollywood director who came in to talk with us and he opened up his speech by asking the crowd something to the effect of, "raise your hand if you want to be a Hollywood director". Sure enough, almost everyone raised their hand... He replied to that with, "Have a back-up plan, chances are it's not going to happen". At the time I thought, "What a prick", but the truth is... he was right. To the best of my knowledge, no one that I went to film school with is now a "Hollywood director". Sure, there's a lot of success stories, but no one who would be mentioned in the trade papers or anything. I think the most successful guys were the guys who did technical stuff; camera operators, sound guys... you can make a good career doing that. In fact, one of my film school buddy's started as a camera guy on reality shows, moved up to being DP and he's now directing the odd show. On the flip side, most of the guys who just wanted to be directors, still just want to be directors, but I digress...

That was then, this is now... check out this article that I just read in Forbes on Alan Horn, the guy who runs Warner Bros. They're basically saying that, to make money these days, they have to make half the movies at twice the cost. They require almost all movies to be 'tent-pole' movies, like "Dark Knight" or "Harry Potter". They require the ability to have a sequel, video game tie-ins, merchandise, etc... Now, juxtapose that with what we're seeing out of the indie world... especially considering the fact that most studios have stopped making what THEY call indie films - those $5 - $20Million dollar "indie" films are done, the market is WAY over saturated with that shit and they're not going to be able to compete for screen time against the studios, especially knowing that the studios collude with the theater owners, but whatever... The point is, once again, the gap between Hollywood and TRUE indie film widens, yet again. So, how are you supposed to be seen in this industry? How are you going to 'make it'? How are you supposed to compete?

The easy answer is, don't. There's a long list of companies, big and small, who gained success by doing the complete opposite of what the guy who dominated the market was doing. The fact is, embrace the fact that you can do whatever the fuck you want and give up the dream that you're going to be the next Scorsese, Del Toro or John Waters. In all honesty, do you want to be filthy rich and famous or do you want to make films? If it's just about making enough dough to get by and make films, great. You're past the first step. Now that you've come to terms with that, remember that Hollywood HAS to be PG-13, they have to cater to everyone... YOU don't. You should be doing what they can't do. You need to find a particular, little niche and be the BEST shit in that genre. I don't give a shit if it's MMA related gore films. If it is, go make a film about a group of MMA fighters in a gang war, who happen to all be cannibalistic werewolves, I don't know. The point is, it's WAY better to be the BEST in a small, little niche, than it is to make another film that tries to cater to everyone. Go crazy, be fucked up, do something that's WAY out there. It's better to be noticed for something that's insane and ridiculous, than to not get noticed at all. Remember, Scorsese made it because he OWNED that gritty, New York gangster scene, Del Toro OWNED the Mexican horror scene and John Waters OWNED fucked up, retarded films that made no sense to anyone.

So, go find YOUR niche and OWN it... maybe you'll get noticed. Maybe it'll lead to a job directing a "Hollywood" film, who knows? But, I promise you that just doing what everyone else is doing will lead you nowhere.
Posted by Dead Harvey at 9:22 AM