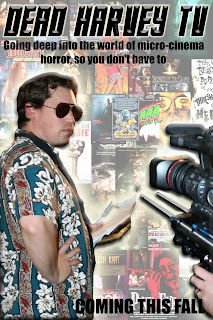 No, I didn't forget to post something yesterday, I just didn't have the time... sorry. Spare time is a luxury these days and a lot of mine has been going into working on our "Dead Harvey TV" project... which is moving along, by the way. Since I'm on the topic, the pilot is done and it was screened to good reviews. Granted, those reviews were from other people in the indie horror scene, but they were good. Now, we're polishing up a bit of a press kit, making some copies and are about to send it off to a few places. Don't worry, we'll be sure to keep you posted. (early draft of poster idea to the right, there - needs a bit of work, I know)

So, this post is going to be a mix of film fest updates and links... I happened to come across a few interesting things that I felt like sharing.

First off, for guys like us, it's a fairly embarrassing weekend at the box office, I gotta say. The biggest movie out is "Jonas Brothers: The 3D Concert Experience", followed by "Street Fighter: The Legend of Chun-Li", which is, yes, based on the video game. Further, next week is fairly soft, as far as DVD releases are concerned... but I'll get to that on Monday. So, go check out "Friday the 13th" in the theaters, if you get a chance!

Now, for film festival announcements... it's time for Shriekfest Film Festival's call for entries. It's one of our favorites of the year and they're now going on to their 9th year, if you can believe it. The festival takes place October 1st - 4th, 2009 and they do networking events throughout the year in LA. So, go check them out at shriekfest.com.

Fantasia Fest, which takes place in Montreal, Canada, July 16th - August 3rd, now has their call for entries open, as well. Fantasia's one of the big ones and it's something that you should attend, if you can. For more information, go to their site at fantasiafest.com.

Lastly, on the festival front, tickets for Dead By Dawn, which takes place in Scotland, are finally going to be available on Tuesday... I think. All the emails they send are fucked up and cryptic. Like, here's a quote from their last email, "The utterly fantastic news is that Passes for this year's Dead by Dawn and Spawn of Dawn will go on sale from 11am on Tuesday March 3rd". Actually, after reading it out of context, I guess it's not that bad... but you should read the whole thing. Anyhow, the festival is April 30th - May 3rd and for more information on it, go to deadbydawn.co.uk.

Now, on to some interesting tidbits that I found on the internets...

Check out this awesome quote: “Success will return to Hollywood once again when the gutted creative process and talent is re-established at a bearable cost. And it will be on the shoulders of the creatives, not the accountants, that a return to greatness is achieved”. That's actually from Drake Pruitt's blog post on Peter Bart's article from Vanity Fair and there's links to both in this post from IndieFlix. It's not long, but it's a great read and great news for us indie guys. There ARE people shaking this industry up... so, just stick with it and it'll pay off.

There's an article, more like a blog post, in the LA Times on how Carl Icahn is looking to tighten his grip on Lions Gate Entertainment, here's a link. Now, we all know who Lions Gate is... horror and horror DVD's, primarily, are a cash cow for them. They had a week third quarter, but just recently won the week at the box office with "Tyler Perry's Madea Goes to Jail". Did I mention they also do the Tyler Perry films? They also distribute kids films and work-out videos, but that's besides the point. You know who they are and indie horror distribution is a big, big thing for them. So, who's Carl Icahn? Well, he's a billionaire financier, corporate raider and private equity investor. He's worth about $14Billion. He's a director at Blockbuster, has had significant holdings in Time Warner, he tried to take over Marvel Comics at one point and he just upted his stake in Lions Gate to just over 14%. That is, of course, just his entertainment related ventures, he does lots of other shit, too. I just find it very interesting that he's so interested in them... must be something there.

So, that's all I got for this week... now go get your drink on this weekend and we'll see you next week!
Posted by Dead Harvey at 9:00 AM

The Carl Icahn thing is very interesting. I'll have to keep an eye out on it. Lion's Gate is poised, by sheer familiarity, to rally the indie filmmaker troops because they're like an approachable household name to us.

It's good to see that change is coming from within the industry. But I think the greatest potential for change may be from "outsider cinema."

[B][URL=http://www.watch-onetreehill-online.info/]Watch One Tree Hill online[/URL] seoson 7 and all old season with a High Quality online for free.[/B]

Select your episode and watch it with a [COLOR=Red]very high quality[/COLOR] now and discuses about the episodes with other OTH fans all around the world from USA from Russian from Indonesia and share your thought about the episode and how to improve the show more how damn simple is that???