New Horror out on DVD this week... including a little Tokyo Shock 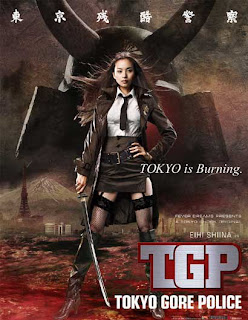 Wow, another good week in horror. I've just recently seen "Tokyo Gore Police" and it's definitely my pick of the week. If you're looking for something different, look no further than Tokyo Shock, my friends. Also, as usual, head on over to our Youtube Page to see all the trailer and, if you're interested in buying one of these films, click on the title and buy it from Amazon, through us.

If you're into over-the-top, ultra gory Asian films like I am, "Tokyo Gore Police

" is this weeks 'must-see' film. We really pumped up "The Machine Girl" when it came out a few months ago and if you saw that and liked it, you'll dig this one too. It's the same sort of Kung Fu, blood-fest, but this one's way more fucked up. Trust me, it's wicked. It's set in the near future in Japan and The Tokyo Police Force has been privatized to deal with these engineers that can grow weaponry out of any wound inflicted on them. So, the Tokyo Police Force trains a special group of officers called 'engineer hunters' to deal with them. I've seen it, it's awesome. Go check out the trailer at our Youtube Page, you'll know, pretty quick, if it's a film for you...

Probably due to the fact that the 3-D remake of this is getting a theatrical release, Lions Gate has secured the rights to 1981's "My Bloody Valentine

" and are rereleasing it, uncut. This is interesting for two reasons... the first is because the original film is notorious for having had 9 minutes cut by the MPAA due to gore and, to the best of my knowledge, those 9 minutes have never been seen. The second is because of the 3-D release that's coming out. I think it's a really cool idea... I also think it's an idea that could end up saving the movie theater business. No, not this one movie, but the idea to do something bigger and better than what you can get at home, such as 3-D. Not only that, if you follow the CES, you may have read that Sony CEO, Howard Stringer, said that good 3-D technology is "closer than you think". I don't know about you, but a good 3-D movie horror movie could get me off the couch and in the theaters...

" is from Alexandre Aja, who's part of that unofficial 'Splat Pack'. He's the guy who came to fame after making "Haute Tension"... or "High Tension", as it was called in North America. His first film was something called "Furia", which I haven't seen, and he followed up "Haute Tension" with the remake of "The Hills Have Eyes". "Mirrors" is his latest and he's now in production on "Piranha 3-D". (You see? 3-D is going to be the next thing, I'm telling ya...) "Mirrors" stars Kiefer Sutherland and it didn't actually do that well. Personally, I didn't check it out, but I'm sure I will in the next little while. It's about an ex-cop and his family, who are the target of an evil force that is using mirrors as a gateway into their home.

" comes from writers Diane Doniol-Valcroze and Arthur Flam and director Enda McCallion. It's the first feature film from McCallion, but you may know of Doniol-Valcroze and Flam's previous screenplay, "Penny Dreadful", which was part of the After Dark 8 Films to Die For from a few years ago... Now, I haven't seen this, but it appears to be a blatant rip-off of "Stuck", which was from Stuart Gordon, starred Mena Suvari and Stephen Rea and is an award winning film, based on the true story of a girl who commits a hit-and-run and ends up with the dude stuck in her windshield, in her garage. "Hit and Run" stars Laura Breckenridge and Kevin Corrigan and it's about a college student who thinks she's hit a cat while driving home drunk from a party, but is horrified to find out that she's hit a man and he's impaled on the bumper of her Jeep. I really hope there's a twist or something, as it sounds, well... identical.

Originally called "Raksha: Curse of the Snow Demon", they eventually settled on the much more simpler title, "Yeti

". "Yeti" is the 12th entry into that Maneater DVD series that gets a lot of airtime on The Sci Fi channel. It's about a plane carrying a football team that crashes in the Himalayas and after crashing, not only will the survivors have to figure out how to make it to safety, they'll also have to contend with The Abominable Snowman... or is it AN Abominable Snowman? I guess it depends if they insinuate that there's only one or if there's lots of them. Personally, I'd like to think that the Himalayas are inhabited by hoards of Abominable Snowmen. Maybe only some of them are bad and kill humans... Maybe some of them just go about their own business, doing Abominable Snowman chores, raising Snowchildren and doing their best to get by in these tough snowmen times... now, what God-fearing snowman WOULDN'T protect his snowpeople by hunting down this group of strange beings that fell from the sky? Sorry guys, I'm on the snowman's side on this one.

". Now, if you're not familiar with the series, they are true no-budget indie horror films and they're done quite well. However, I don't think they're quite 'date night' material... as the first two films are about a killer who finds a young girl to bring back to his place, where they have sex... and it gets more and more aggressive, until he kills her. Further, there ain't none of that implied sex in these movies. Not only is there full frontal male and female nudity, there's explicit, hardcore, penetrative sex. These films are not for everyone... in fact, Ryan does his best to disgust you. If you think you're up for it, check it out.

" comes from award winning Mexican director, Rigoberto Castaneda and, although it came out in 2007, it's the follow up to his award winning horror film, "KM 31: Kilometro 31". He actually wrote and directed "KM 31", whereas he only directed "Blackout". It's about three people from different walks of life that find themselves trapped inside a stalled elevator... however, what at first seems like an inconvenience, rapidly escalates into a nightmare. It's rated R for sadistic, bloody violence, including rape, nudity and language, so I can only assume where that nightmare leads.
Posted by Dead Harvey at 9:00 AM