"Horror Meets Comedy" on the XBox 360 and the future for indie filmmakers? 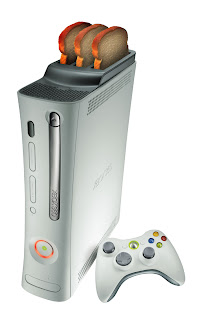 This was actually going to be a Linkapalooza post with links to a few articles and other stuff, but I ended up going on way too long about the first article. So, you get a whole post about video gaming consoles and why you, as an indie filmmaker, should know more about them, if you don't already.

"Xbox Channel Goes Live With 'Horror Meets Comedy'" on wired.com: As you probably know, the Xbox, PS3 and Wii are all fighting for space in your living room by not only being a gaming platform, but by providing you with exclusive content, connecting to your PC and playing media files. The above article is about a pretty cool series that XBox is doing called "Horror Meets Comedy", where a bunch of horror directors are making short comedies and XBox allows its owners to download them for free on the system, their laptops or PDA's. I'm not going to get on my soapbox here and rant about the future of entertainment, but you better start thinking about shit like this because, unless you missed what I just said, Microsoft is producing and distributing content from horror filmmakers. The simple fact is that film and television (print and radio, as well, for that matter) are not going to be the same in 10 years. I'm not saying it's dying, I'm saying that it's going to be drastically different... and if you want to get paid to make content, your check may be from Microsoft, Nintendo or Sony, not Paramount, Warner Bros or, well... Sony.

Much like most of you, I'm assuming, I WAS a big gamer. I loved the arcades, my first computer, I loved my Nintendo, my Sega. I loved it all. However, right around the time I went to film school, it faded away. Unplugged the console and plugged in a DVD player, movies are more important. HOWEVER, like I said, gaming consoles are back and they ARE the future. So, here's my question. I'm going to buy myself a system this Christmas, but I'm still not sure which one...

Here's my thoughts... The Nintendo Wii's games are a little out there, but they are really fun. It does connect to the internet, but outside of a couple news and forecast channels, it's more for communicating and talking with other Wii systems. There's been talk about a newer model having DVD-Video playback capabilities, but that's not happening any time soon. The Microsoft XBox is, apparently, the best choice for gamers. I have a friend who works at EA and he scoffed at getting any system but the 360. Outside of the games, it's compatible with the Zune and can share media files with it. It supports music and videos in a bunch of different formats, but it does not play DVD's. It will connect to the internet and can stream files from your PC, which is pretty cool. It also has it's own community, it's own channels and you can get content, such as the afore mentioned "Horror Meets Comedy" series. Recently, I heard that Microsoft is going to open the platform up to allow 'home brew' games and other content to be downloaded for free, as well. Then, lastly, there's Sony's PS3. I've heard that it's the best technical system out there, but it's never lived up to its potential. As far as games, it has very few unique titles. However, much like the 360, it's also compatible with just about everything, it supports all music and video files and it connects to the internet and can stream from your PC. However, here's a couple things that it does that the other systems don't, it has it's own Linux system, so you can browse the internet and it's also the best Blu-Ray player on the market.

For me, I think the fact that the PS3 is a Blu-Ray player (and can play ANY DVD, burned or otherwise) and has an internet browser to go with it, is going to push me in that direction. However, never underestimate Microsoft. So, what do you think? What's the way to go?

Now, some of you might be thinking that this is a site for horror filmmaking and what the fuck does this have to do with anything? Well, really, I think it has a lot to do with filmmaking. Video games are turning into a bigger entertainment industry that film and the studios are all scrambling to jump on board. They're working it from both angles... they're creating games and online content out of their films, plus their taking games and online content and turning it into films. If you know nothing about gaming and the consoles, do yourself a favor and learn about them. They are the platforms of the future and you better be able to adapt.

Before I finish, check out this article called "Miramax Web Games Build Buzz for 'Adventureland'", where Miramax has an online game built and creating buzz for a film that comes out in March of 2009.

The future is racing towards us, be ready!
Posted by Dead Harvey at 9:00 AM