Interview with Christopher DiNunzio, writer/director of "Her Heart Still Beats" 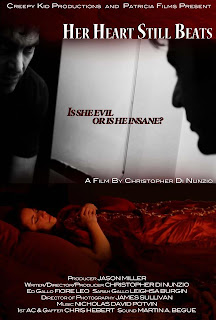 I always like doing interviews with filmmakers that we've talked to before.  It's great to see how they've evolved and, also, to know that they're still out there, fighting the good fight.  A true indie horror filmmaker is kinda like those cheap clown punching bags, you know?  They don't cost much, they get the shit kicked out of them and they're not widely regarded as the best toy on the market, but they keep popping back up and they're always smiling.  I don't want to say that Christopher DiNunzio is like a cheap clown punching bag, but he certainly is an indie horror filmmaker.  The last time we spoke with him, we were discussing his feature vampire gangster film, "Livestock", which is a great flick and if you'd like to go back and check out that interview, click here.  Now, DiNunzio is back with a horror short called "Her Heart Still Beats" and here's what he had to say about it...

The film is called "Her Heart Still Beats" here's the synopsis: When Ed's wife comes home early from work one day he becomes overtaken by a strange feeling when he looks into her eyes. Disturbed or possibly just paranoid, Ed becomes possessed with his wife's eyes and struggles to understand these feelings. Is she evil or is he insane? They may not have enough time to find out.

I don't mind you asking but I'm not telling! LOL. It was low. Very low. We own a lot of equipment so it cuts the cost down. Me and my producer Jason Miller financed the entire thing.

My goals are to get as many people as I can to see "Her Heart Still Beats" and use it as a show piece to get more films made. Right now I'm looking into self distribution. I really need to get on that but I just started a film festival with a few great filmmakers and friends of mine (Jason Miller and Nolan Yee) It's called The Massachusetts Independent Film Festival. You can send us Horror by the way! So I've been putting in a lot of time into that. It's been fun! As the film goes I've sent the film out to some people and the response has been great! I'm looking into streaming and hope to get that off the ground soon.

I have sent "Her Heart Still Beats" out to a few festivals, I won't hear back from any until summer. I just started a film festival myself so I think they are great! But seriously they are a good way to get you and your film's name out there. Just make sure you research the festival before you submit and remember if your film gets rejected it doesn't mean it sucks. Some people have no taste and others may have to cut your film because they've gotten a ton of good films in and someone needs to get cut. No one likes cutting films.

My plans are to stream it but I still need a tech guy to help me with that. I can safely say I know nothing about this stuff so If you know someone please let me know! If a company wants to take it on I'd love to hear them out. I'm not dying to give it to a distributor who's just going to sit on it.

I have a donations button on my website (CreepyKidProductions.com) If you donate and send me an email or a note though paypal I'll send you a DVD or Blu-Ray. They are burnt but they look really good. The Blu-Rays look amazing!

I don't have any funny stories because my cast and crew were great to work with and are just good people. We had fun and the set was full of positive attitudes. When you get people who know how to work hard and are willing to do so it makes it easy. I got to work with Fiore Leo and Leighsa Burgin again, and they are just so talented. I love them both. I also worked with a few new people, John Martellucci, Michael Capozzi and William Bloomfield. All three are great to work with and have a lot of talent. I really had an A list cast. No exaggeration. I also would like to mention some of my crew who worked their butts off. James Sullivan, Chris Hebert, Martin A. Begue, Justin Thibault and Scott Reardon. They all put so much into this film. Also Nicholas David Potvin gave me another great score for the film.

I got in to Horror from watching Dario Argento. He showed me Horror is an Art. Then I found Mario Bava, who came before Argento but just as cool. Filmmaking gives me so much pride. I love to create something and have people feel something cause of it and Horror lets you use so many emotions. To go back to Dario I just love his work he seems so free with his filmmaking. He makes the films he wants to see and that's what I try to do. I make films I want to see and hope people dig them and if they do I love them for it! Really all the people who have given me support over the last few years I thank you!!!

The indie horror scene is cool. It's a lot of people that want to see new stuff and share with each other. That's always a great thing. As far as it's future is concerned... Horror will never die!

I do. Myself and another friend of mine, Pedro Alvarado, are writing a feature. It's a crime/drama about the tough decisions people need to make in order to stay alive or to keep feeling alive. It's going to be a dark neo-noir film. We got our inspiration from all those great old Noir films from the 30's and 40's. I can't say too much more about it right now but we hope to start shooting this Spring/Summer. Keep a look out for it!
Posted by Dead Harvey at 3:23 PM