Interview with Darrell Smith about the indie film, "Rage" 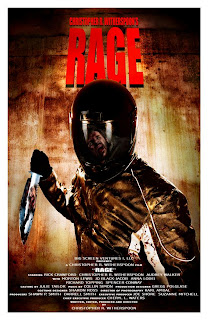 The title of my film is "Rage". Rage, tells the story of Dennis Twist, a suburban 30-something whom unintentionally provokes the wrath of a homicidal motorcycle rider.

Let's just say that the budget was less than craft services on a Hollywood production. Way under 1 million! All of the financing was secured by individual investors.

Our goals are to get worldwide distribution through all channels: theatrical, VOD, DVD, etc. Currently we are doing heavy social media promotion, as well as reaching out to as many reviewers as possible. In addition to any print or online magazines.

What about film festivals?  Are you going to enter your film?  If you have, how did it do?  Tell us about your feelings around the indie film fest circuit.

Rage has been in over 20 festivals across the globe. It has won multiple awards, including Best Horror Feature (Int Horror & Sci-fi Film Fest, Great Lakes Int Film Fest, Hollywood Independent Film Fest, Worldfest-Houston Int Film Fest and the Horror Quest Film Festival). Lead actress Audrey Walker also picked up the best actress award at Horror Quest.  I loved traveling to the film festivals and meeting great people! I do believe that the festivals need to do a better job at filling the seats however! I also hate the politics! Sometimes, if you have a larger budget, known talent, or just are friends with the director, you just may receive an award that you may not deserve!

Talk about distribution.  Have you secured distribution?  If so, how did you go about doing that?  If not, what’s your plan?

We have not secured distribution as of yet. Our plan is to continue to promote and market the film. Hopefully, that will attract the attention of distributors.

People can find out about "Rage" by checking out the website at www.ragethemovie.net or
by following us on twitter at http://twitter.com/ragethemovie.

Talk about the production.  How did it go?  Tell us one good or funny story that demonstrates the trials and tribulations of being an indie filmmaker.

The production went pretty well!. I do have one story to tell. A day before shooting began, we found out that several big Hollywood productions were shooting in the area. They ended up taking some of the locations that we had planned to use! Not only that, but they took up most of the radio bans for walkie talkies. We did some guerilla filmmaking, so we had to be careful not to interfere with their productions and get shut down! One of the Hollywood productions was starring a major actor. So one day we hear on our walkie talkies, "Please bring Mr. so and so to the set".  So, we are all scrambling to change the channel, thinking that we were on the radio band for his movie. Eventually, one of the crew members comes in and when we told him what just occured, he starts laughing and says that it was him just fooling around!

What about you?  Tell us a bit about yourself and how you got into indie horror.

I have been a horror fan since the 70's. Yes, I am that old!...lol. As a kid Ioved horror movies. My favorites were the old British Dracula movies, produced by Hammer Films. I loved Peter Cushing and Christopher Lee. Those horse drawn carriages and old castles; wow! I met fellow horror movie fan and "Rage" director Christopher R. Witherspoon in the 90's, when he was looking for investors for a movie. When I saw a poster of the movie "The Reanimator",a film he had worked on, and another personal favorite of mine, I knew I had to work with him.

Talk about the indie horror scene.  Where do you think it is now and where do you see it going?

The indie horror scene is where you are going to see original material. Hollywood only seems to want to recycle hit films from the past. The only concern I have is that some filmmakers think that every film has to have buckets of blood and a whole myriad of ways to kill someone! Sometimes simple psychological terror is just as, if not more effective!

Do you have any more projects in the works?  What’s next for you?

The next project I plan on working on is a horror anthology titled, "The Twilight Hotel". It can best be described as "The Twilight Zone" meets Alfred Hitchcock. I will once again be teaming with Christopher R. Witherspoon for the film. After that, who knows! I hope to have a long and successful career!
Posted by Dead Harvey at 8:37 PM