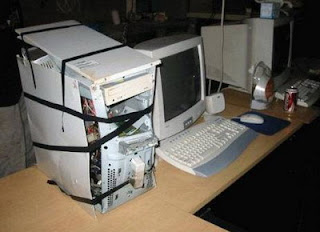 Well, I guess I was playing with fire... my home PC has been acting up a bit lately and it finally died on me this morning. I'll start by reaching out to any techie readers that we may have - the computer gets power, but won't boot up, turn off or reset. The only way to turn it on or off is by unplugging it. When I unplug it, then plug it back in, the fans start up, the lights go on, but no beeping and it's just blank... and it goes right back to not booting up, turning off or resetting. My gut reaction tells me it's the motherboard, but I don't know. The real problem is the information that's on the hard drive, which I never backed up. So, if I can't recover that, I'm in some serious shit. Any ideas?

Anyway, as I have no access to my interviews, saved links and other data, I'm going to have to pull this post together on the fly. That's not really a bad thing, as I was listening to a podcast this morning, from Creative Screenwriting Magazine, that I wanted to talk about. They usually interview screenwriters, but this one was the address that Peter Jackson, Neill Blomkamp and Wikus Van De Merwe gave at Comicon about "District 9". There was something that Peter Jackson said that was particularly interesting and I wanted to pass it on to all you filmmakers... Essentially, he said that because they were on such a low budget ($30Million) and didn't have executives telling them what to do and how to make their film, they could do the film the way they wanted. The way they wanted to do it was to cater directly to the sci-fi/horror, Comicon-type audience. That's why it's a character driven sci-fi movie with lots of gore, something that might not make too much sense to a studio executive. And what happened? Well, it kicked ass and lots of people went to see it. The moral of the story is, when you're making a low-budget film, don't think like a studio executive. Think like a gore-hound. What would YOU want to see in the film? You'll create a better film if you cater to a specific niche... and catering to a specific niche will probably create more of a crossover audience, which will make for a more successful film. Anyhow, you can find that podcast here, on the Creative Screenwriting blog, if you want to download it. The end is pretty cool, where Peter Jackson talks about how watching Blomkamp make this film gave him an itch to make a low-budget horror again... could you imagine "Dead Alive 2" or "Bad Taste 2"?

It's also a good weekend at the theater for us horror fans. Both Rob Zombie's "Halloween 2" and "The Final Destination" in 3D come out this weekend... and there's really no other big movie coming out, which means that "Inglourious Basterds" should win the weekend again. Me, though, I'm a bit torn on which to go see. Originally, I was thinking about "H2", but... I wasn't too impressed with Rob Zombie's interview on "The Wrap" yesterday, he kinda shit-talked a lot of stuff (link). That's not to mention that the first one kinda sucked. However, I'm not a huge fan of the "Final Destination" series, but "The Final Destination" is in 3D and I'm really into that 3D tech.

That's all I've got for this week... have a great weekend and wish me luck on my computer problems!
Posted by Dead Harvey at 8:55 AM