Watching Wolverine and A Look At Some Festivals 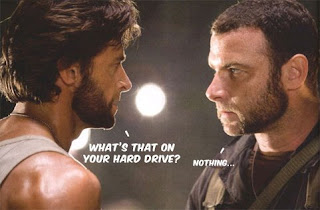 I wonder if a Friday is ever going to roll around where I don't think, "Thank F'ing God". This week was particularly bad... so bad that I couldn't even get around to posting anything yesterday. I was going to rush something, then I figured that I shouldn't put up a shitty post. Anyhow, before I get into a film festival things and all that, I want to take a look at the box office.

I'm interested to see how "X-Men Origins: Wolverine" does for only one reason, it was pirated... big time. Apparently it was downloaded over 1Million times and that would translate into close to 2Million viewers, I'd think. Also, reviews weren't spectacular. So, if it bombs, they're going to blame piracy. However, if it does alright, I think it proves that piracy doesn't have that negative of an impact. I've always thought that people who pirate aren't the same people that go to the theaters. So, if you're film is good, the torrent sites can work FOR you, as those people will spread the good word and they wouldn't have paid to see it otherwise. However, if you're film is bad, those same people will be talking... and you can see how that could be bad. Anyhow, I think it'll still do alright. There's a couple of other decent looking films coming out in extremely limited release: There's the horror/thriller "The Skeptic" and then there's Jim Jarmusch's "The Limits of Control". "The Skeptic" is a haunted house thriller from Tennyson Bardwell and, I have to say, the trailer looks pretty good - click here to see it on youtube. The odd thing is, the film was finished years ago... like 2005. So, I'm not sure why it took so long. If you're a Jarmusch fan, "Limits of Control" will be a must-see. Trailer looks quite intense, check it out here. As they're both extremely limited releases, so you can expect them out on DVD fairly soon. Now, what else is going on?

The regular deadline for the Script Pimp Screenwriting Competition is today, which is to say you can still enter, but you'll have to pay a bit more. Although Script Pimp has an odd name (the Pimp actually stands for "Pipeline Into Motion Pictures"), they're actually one of the more respected screenwriting competitions out there. Each year, they match writers with top representation and offer unprecedented exposure, while pushing projects forward. They offer up to $50,000 in goods and services, including screenplay notes from Script Pimp, one-on-one consultations, screenwriting software, magazine subscriptions, and lots more. All 20 finalists receive $200 cash and the four Grand Prize winners receive $3,000 each. They accept teleplays for TV, feature scripts and... I think that's it, but what else would you be writing? They also have workshops and things like that. It's a great resource, if you want to pay for it. Go roam around their site here.

For those of you who've finished a horror short, you should think about submitting it to Fangoria for the upcoming Frightfan Filmfest. Fangoria's looking for the 'horrific best of the best' to be included at their Weekend of Horrors event in L.A. and New York, as well as to be featured on Fangoria.com. There's no prizes, it's all for pride, and there's no final deadline, as it's a rolling, ongoing call. They're looking for stuff that's four to thirty minutes long. Click here for more info.

Now, I want to mention these friends of Dead Harvey again, just because they asked me to very nicely... Having said that, if you run a festival and want us to mention you or would like to talk with us, let me know. Always open to stuff like that!

First up, Fright Night Film Fest: Coming up in Louisville, KY this August 14-16, it's the 5th annual "Fright Night Film Fest". They're the largest genre film festival in mid-America AND they're currently accepting submissions for all types of films and screenplays - click here to be taken to their submissions page. It's a wicked festival to both attend and submit to, so check it out. We'll definitely keep you posted on this one...

Have a great weekend, guys... I'm finishing up two projects today, so I'm hoping to get caught up on a few movies and work on the site a bit over the weekend. Can't promise anything, though. The weather's nice and there's lots of bars with patio's around here.
Posted by Dead Harvey at 9:00 AM

Generic Viagra (sildenafil citrate; brand names include: Aphrodil / Edegra / Erasmo / Penegra / Revatio / Supra / Zwagra) is an effective treatment for erectile dysfunction regardless of the cause or duration of the problem or the age of the patient.
Sildenafil Citrate is the active ingredient used to treat erectile dysfunction (impotence) in men. It can help men who have erectile dysfunction get and sustain an erection when they are sexually excited.
Generic Viagra is manufactured in accordance with World Health Organization standards and guidelines (WHO-GMP). Also you can find on our sites.
Generic [url=http://viagra.wilantion.ru]Viagra 100mg pills[/url] is made with thorough reverse engineering for the sildenafil citrate molecule - a totally different process of making sildenafil and its reaction. That is why it takes effect in 15 minutes compared to other drugs which take 30-40 minutes to take effect.
[b]taking viagra with tramadol
virtual viagra desktop emoticon
when to use viagra
viagra pill comparisons
Prostatitis Viagra
Viagra Message Board
free viagra samples online
[/b]
Even in the most sexually liberated and self-satisfied of nations, many people still yearn to burn more, to feel ready for bedding no matter what the clock says and to desire their partner of 23 years as much as they did when their love was brand new.
The market is saturated with books on how to revive a flagging libido or spice up monotonous sex, and sex therapists say “lack of desire” is one of the most common complaints they hear from patients, particularly women.