Box Office Round Up and a look at what's coming out on DVD this week... 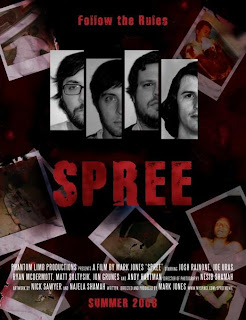 Welcome, friends, to 2010! I've gotta say, I'm starting it off a bit foggy... After a week and a half of part-time working, culminating with a ruckus day at the sports bar for the conclusion of the NFL season yesterday, it pains me to have to get back to my regular schedule. Not because I don't want to work, but because I'm in actual pain... and a barely remember how to type. It's going to take a bit of a purge and a lot of coffee to get back up to speed. In any case, the big news at the box office is that "Avatar" continues its dominance. It surpassed the $1Billion mark and is currently, after only 3 weeks, the fourth highest-grossing picture, ever, worldwide. In reality, not only will James Cameron have the first and second highest grossing films in history to his credit, "Avatar" may end up surpassing "Titanic" to hold the title. Amazing. This upcoming Friday also marks the return of horror to the big screen, as "Daybreakers" finally comes out. After that, it looks like we'll be getting a major horror film every couple weeks or so, for a while. As for what's being released on DVD, it's a decent week, as well... especially if you're into indie horror. As usual, you can go over to our Youtube page to check out all the trailers and you can click on the titles and be taken to the films Amazon page, where you can read more and/or buy it.

The one big-budget film of the week is the final installment in a franchise that almost all horror fans should know about... the "Final Destination" series. What you may not know is the story behind how the franchise was born. Screenwriter Jeffrey Reddick was disappointed about an "X Files" spec script that he had written, but that was largely ignored. His buddy, television director James Wong, was inspired to make a film using the script - the original "Final Destination". David R. Ellis directed the second, Wong came back for the third... which was supposed to be the final installment and in 3D, but they axed the 3D due to budget restraints. Then, all the original players decided to get together to make one more, fourth and final installment, in 3D, which now comes out on DVD - "The Final Destination

", which is the first film from writer/director Mark Jones, looks awesome and I'm going to have to try to get my hands on it. It screened at the Seattle True Indie Film Festival, as well as the Fright Night Film Festival and a few others... and got great reviews. It's about a group of slacker-types who decide to go on a coast-to-coast killing spree to relieve the stress of their everyday lives. However, it's a game and there's rules... murder one person in every state they enter and the prize? The winners walk, while the losing team confesses to the crimes. Love it.

Tommy Brunswick has come out with quite a few decent indie horror films lately, including "Little Red Devil", "Evil Offspring" and "Biker Zombies From Detroit". Now, "They Must Eat

" hits the shelves... and I love the concept. Basically, this guy has a bunch of demons living in his basement and he needs to keep feeding them... and it's safe to say they don't feed on organic vegetables.

", from director Eddie Lengyel, looks pretty good and it's a great title for a horror flick. In fact, I've got a little story about the title... I have a buddy who wrote a spec script called "Hellweek" a while back and, at the time, we were shocked to find out that the title hadn't been used. Not only that, the idea of a horror taking place during rush week hadn't really been done, either. In any case, my friends script is still sitting around, unproduced, and is quite a bit different than this. A small title change and it's still a very viable project, anyone interested? In any case, this film is about a rush week that turns hellish when a band of sadistic, masked, homicidal maniacs wreak havoc on a bunch of not-so-innocent college kids.

" is from Dwen Doggett and it's the first film that he's directed in over a decade. He also wrote and directed "Feeding Billy", produced "Bloodthirsty Cannibal Demons" and wrote "Zombie Bloodbath 2: Rage of the Undead"... all in the mid-to-late 90's. "Ravage" is about a Shaman spirit that returns to a mid-West town to make the town pay for the sins of it's forefathers.