Your Career In Film, Plus A Look At Some Festivals 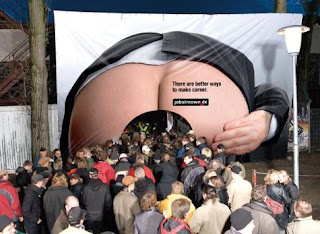 I was just thinking about how hard it is to break into the film industry, especially as a writer or director. Really... think about it. Take almost any career path: lawyer, doctor, teacher... whatever. There's usually a set path to success available, if you choose to take it. You get your education, then you look for a place to get started and your college, in a lot of cases, will probably help you out. There's job fairs and, sometimes, the different businesses and institutions come to your school to tell you why you should consider them as a place to article or start out. One way or the other, you usually get a job in your industry of choice. Then, as you get familiar with everything, you work your way up, move from job to job and, slowly but surely, pick your career path. Obviously, there's more to it than that, but consider the path of a filmmaker... You graduate college, then, almost instantaneously, get a job that's unrelated to what you want to do. It could be 'kinda' in the industry, like as a PA, assistant or in the mailroom, or it could be completely unrelated, like bartending. Now, for no money at all, start writing, or, collect some money from that money tree in your backyard and go shoot something. Either way, go out and do it on your own and, chances are, you're going to incur some debt along the way. On top of that, chances are that very few industry insiders are going to help you out. It's one of the only industries where it seems like those who are already in try, to keep others out. Even in professional sports they have an draft, then they place you somewhere and let you work your way up... or let you figure out that you were never meant to play professional sports. I do know that the film industry favors the wealthy, too... in that you see a lot of rich kids get into it and their parents support their efforts. That way, they don't have to take those unrelated jobs that get in the way of their careers. I mean, at the end of the day, this is all to the best of my knowledge. Much like you, I assume, I've really only seen one side of the fence. Sad state of affairs, I know...

However, I think things are changing a bit. Really, if you wanted to be in film from, say... it's inception through to the 70's, you just did it. It was like working in steel or lumber. Then, the 60's and 70's brought on that onslaught of 'film school' filmmakers, as all you had to do was go to film school and you were going to get a decent job in the industry. Spielberg, Coppolla, Lucas and those guys were the first wave of that. Then, from the late 70's up until around now, the industry became like a secret, locked and guarded garden. Anyhow, like I said, things ARE changing. The internet and new media are rattling the foundations of the studios and opening doors for everyone else and this explosion of film festivals has given indie filmmakers a new forum to showcase their work.

This is why I always harp on the festivals and promote them... I think they're absolutely integral to the indie filmmaker. They're even ground, in a way. They're a place where you can compete, mingle with and relate to those on the inside. You need to read about them, attend them and submit to them. So, after that long, drawn out lead in, here's a few festivals to consider...

The Women of Horror Film Festival is taking place on Saturday, April 25th from 5PM to midnight at the Portage Theater in Chicago. There's a pile of films screened and there's vendors, giveaways, booze, a raffle, special guests, movies, trailers and more. Tix are $12 online or $15 at the door. Seems like a steal. Here's a link to their site.

Independent Film Festival Boston takes place April 22-28 and it's hailed as the city's best-run and most popular film festival. This year's event continues the festival's tradition of great movies and personal appearances by the filmmakers and actors who created them. Guests this year include Hal Holbrook, Barry Corbin, Brian Cox, Ondi Timoner, The Farrelly Brothers and more. Tickets for individual shows just went on sale, here's a link to their site.

The Calgary Underground Film Festival is already under way, as it runs April 14-19, but if you're in Calgary, check it out this weekend. If not, remember it for next year. They're known for screening a lot of edgy, sex-laden and violence-filled, wacky fare. Here's a link to their site.

The Hollywood Film Festival is one of those big ones and it has an approaching deadline, which is April 30. That's the regular deadline, you can probably still get your film in after that. This is one gets a lot of industry insiders and is definitely one to attend and submit to. Here's a link to their site.

The H.P. Lovecraft Film Festival & CthulhuCon, which takes place in Portland, OR, has been getting a lot of good press lately and is a rapidly growing festival. They only accept Lovecraft-like films, but... you know what? Almost anything can be considered Lovecraft-like. May 1 is the early deadline and here's a link to their site.

Oh yeah... and Fangoria's LA Weekend of Horrors is happening this weekend at the Los Angeles Convention Centre. For more info, go to the Fango site, which can be found here.